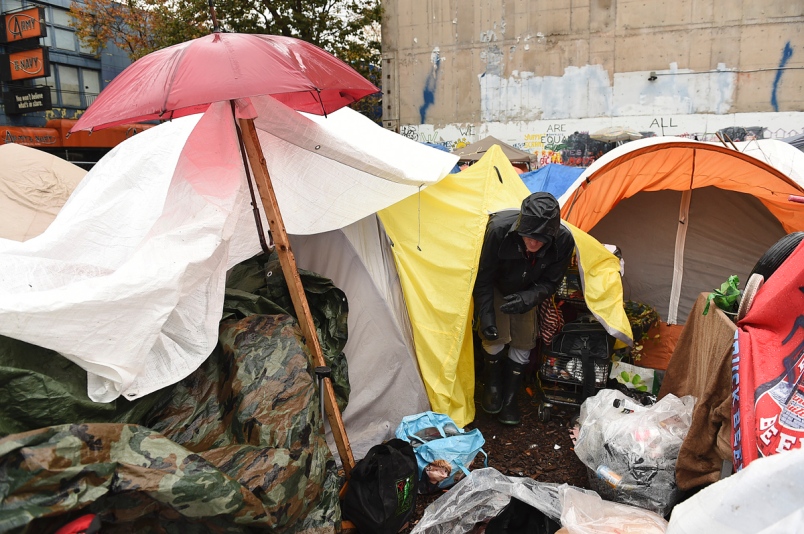 From the affidavit of Stacey Dubois, resident of 58 W. Hastings tent city

I live at 58 West Hastings with my common-law wife, Helen. We have been together for 8 and a half years. I am currently unemployed. I am on income assistance and disability.

I am currently homeless and have been for about 2 years. We moved to the tent city at 58 West Hastings because it was safer than staying on the street and we were tired of having to move around all the time.

Problems with the streets and the shelters

Before 58 West Hastings we lived all over, from the church across from the library to a space near the skytrain station. We’ve stayed at the skateboard park under the viaduct and a park area near the BC Hydro building. I have heard lots of people say that staying at 58 West Hastings is safer than staying shelters, where there is sometimes violence. Here you aren’t repeatedly being woken up or thrown onto the street early in the morning.

We’d always get interrupted while sleeping at those places. We’d be awoken at about 7am by City staff and they’d tell us to pick up all our stuff. We’d pack up all our things and drag it to wherever we were going. We’d go look for places to eat and shower.

We have stayed in shelters before but they are very often full and there is not enough room. Another big reason we don’t stay in homeless shelters is because they don’t accommodate couples. We have gone to numerous shelters and been turned down because it is not a co-ed shelter. Sometimes there is room for women, but Helen won’t sleep there without me. She feels safer being with me; she is worried both about being alone inside and about me being alone outside.

Another thing about shelters is that things always get stolen. Otherwise there are bed bugs. Sleeping outside, at least this way I know I’m not going to get bitten by a bed bug. I also know that I don’t have to be woken up at 6:30 or 7am. That’s what happens in the shelter. Depending on the shelter, you usually have to be out by 8 or 9 in the morning.

When you stay in the shelter, you can’t stay during the day. You can either leave your belongings behind and risk having them stolen, or you have to pick up your things and leave. That gets exhausting.

Even though we find that it’s safer to be outside, it’s still difficult. At one point all of my belongings were stolen when we were camping outside. We left to go take a shower and everything was gone when we got back—my bedding, my blanket, personal papers, and a lot of personal belongings.

There’s nothing you can do in a situation like that. It’s pretty hard being in a relationship when that happens too—it puts a lot of stress on us. It puts us back at square one. We have to go find new clothes, for instance.

There is a lack of spaces for us to access during the daytime. We either go to the library or else we try to house hunt. We spend a lot of time sitting on benches. We’re really limited in terms of where we can look for a place and its especially hard because transit doesn’t let you bring your stuff on the bus. So if we want to go look [for an apartment] out in Burnaby or Coquitlam, we wouldn’t be able to; or only one of us could go and then they won’t lease it to just one of us: they want to see us both. But how can we do that if we don’t have anywhere to keep our things?

We have been looking for an apartment for about two years. The available housing in Vancouver is very slim. They don’t want to rent to people on assistance; they also do credit checks. When you show up to an apartment viewing with a stroller with some of your belongings, it doesn’t look good. I believe that to be a big reason why we have been unable to get housing. We’ve even hidden our stuff before going to a viewing. We had one landlord tell us that we couldn’t bring our furniture in from outside. She assumed it was from bins or the garbage. I told her that we had our stuff in storage. We didn’t get the place in the end; I don’t think she had any intention to rent to us. The renting situation in Vancouver is really hard for everyone.

An outreach group once tried to help us but they took us to the Cobalt; the landlord there demanded our rent and deposit. We were told not to have any drugs or alcohol or parties. This was fine with us because we don’t do drugs or alcohol. We were taken to the room. The deadbolt on the door was broken. Inside was a double bed with one sheet, half-on, half-off. The floor was dirty and there was graffiti on the walls and the window was half cracked and it didn’t close. We stayed there about 15 or 20 minutes; we said that we would take it and fill out the intent to rent forms, but after that decided not to live there.

Our ideal living situation would be a 1 or 2 bedroom apartment with a working stove; a place to rest our feet and call our own. We don’t really need any kind of assistance to help get fed or shop or anything. We are self-sufficient; we can cook and clean and do our own dishes. But it’s just unaffordability that prevents us from having that.

Surviving together at the 58 tent city

When we first got to 58 West Hastings, the site was actually quite good to us. We were capable of not packing up our stuff and hauling it around all day. We were okay to leave our belongings on site for a short time. We had neighbours to guard our stuff and we’d do the same in return. This was really helpful if we needed to leave the site, say to look for a place, to eat, or to take a shower. There was a strong sense of community at the start.

The site was also good for a proper night’s sleep. We had the proper bedding to lay down to sleep with. We shared blankets with people and vice versa.

The site also provides us close access to public washrooms, the Gathering Place, and Evelyn’s Centre. These are places where we can get low-cost meals and showers.

The site allows for better harm reduction too. VANDU and another organization hosted a harm reduction workshop and then afterwards they handed out Narcan to the people that took the workshop. I think this was important because I know at one time there were three separate overdoses in a single night.

I have administered Narcan to an individual at 58 West Hastings. A person was yelling on the site that someone was overdosing. I ran over with my Narcan and asked which tent it was. When I found out the location, I went into the tent with their permission to revive the guy. I put him on his side, cleared his throat, checked if he was breathing. He had very small amounts of breath until it stopped completely. Then I injected the Narcan into his shoulder. It took a while to take effect. I thought about administering another vial to him but he came out of it before then. By that time, the ambulance was there and they took over from there. They took him to the hospital to make sure he didn’t go back under.

If no one had been around—if that person had been by himself—he would have died for sure. It was because I was there and I was alerted right away. I believe that tent cities are helpful in this way; when people overdose, other people know and are able to help or call 911. That doesn’t happen when people are dispersed or isolated.

I contribute a lot to the upkeep of 58 West Hastings. I pick up my own garbage and other people’s garbage. I try to make certain that the area is clean. After the eviction notice in October, a few of us who lived on the site cleaned up about 75% – 80% of the garbage on site. We had to use our own gloves and we used the tarps to drag out most of the garbage onto the sidewalk. The City would take it from there.

We had to be very careful in cleaning up. There were needles everywhere. I had to be careful where I stepped to make sure I didn’t get stuck with a needle. There were no real harm reduction supplies on site—no rig boxes or anything.

I have helped with security on the site. I did a couple of 12 hour night shifts, watching the front gate and making sure that the noise level was down and no one was fighting. It was pretty quiet.

We negotiated to use the Thunderbox trailer on site and they allowed us to use it for about a week, but the facility wasn’t efficient enough for the number of people we had. There were too many of us. We closed the trailer down and asked the City for washrooms. They provided them, but ended up removing them about a month ago. My understanding is that the City wanted to close down the site by a certain date, and so they began withdrawing services. This has made it really difficult for us to maintain the site.

Gentrification and COVID-19: Fast-tracking the death of Surrey’s poor