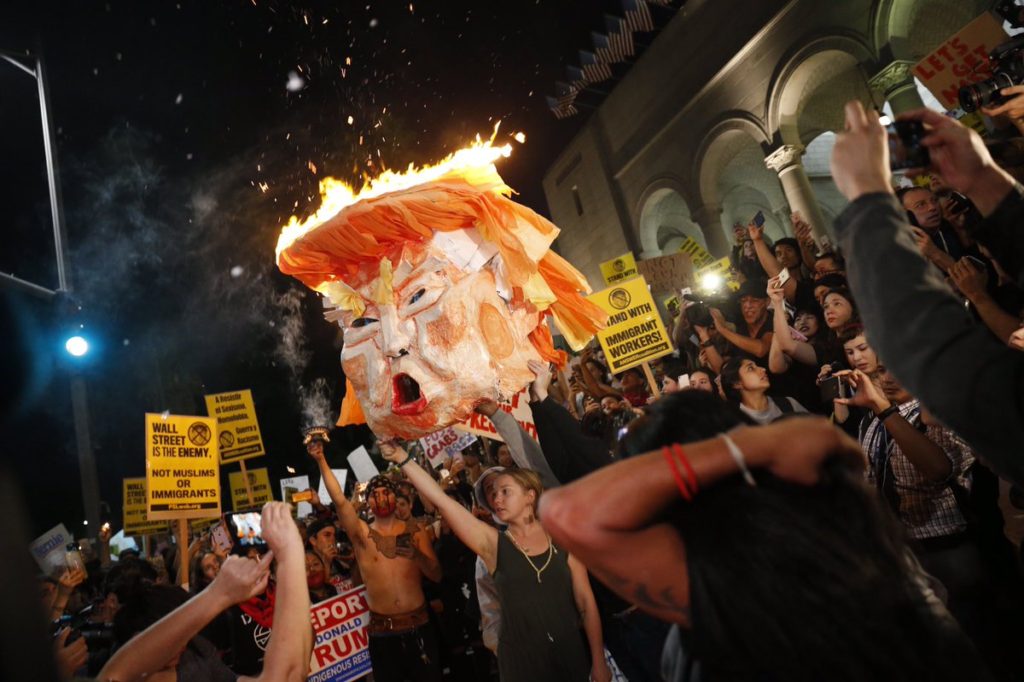 I woke up the morning of September 11th 2001 to a man shouting from a dirt road near the shack I had built on Haida Gwaii. He was driving back and forth so every dirty hippie mushroom picker could get the news. I had to wait until he circled around again to catch what he was saying. “They bombed the United States!” I heard him yell from his pickup truck window. I gathered with a few others and we drove into town to watch the news in the Sandspit bar. And then I abandoned my ill-formed burned-out-activist plan to live alone forever in the bush and caught the next propeller plane back towards Vancouver. I had a terrible feeling, a sinking horrible realization that I was at a turning point in history. Not that George W. Bush would create US imperialism, but that he would invigorate it; that I had woken that morning suddenly trapped and sinking into a horribly energetic white supremacist war machine.

Trump’s victory is not another 9/11 but I had a similar feeling when it happened.

Like Bush, Trump did not invent white supremacy, white nativism, misogyny, trans-antagonism, homophobia, right-populism, or fascism, but it feels like he has invigorated and encouraged that clot of hate at a social and cultural level. Exit polls reveal that Trump did not even invent or expand a new Republican base – Republican voting turnout was not any larger than it was in 2012. And he did not inspire the so-called “white working-class.” Trump’s voters were significantly higher income than the sympathetic figure that news media has painted of the disillusioned, alienated poor white worker laid off through the deindustrialization of globalization. It appears that the great unifying force of his campaign was white hate. Before the material and policy effects of this clot come down in the form of his (extremely unpredictable) presidency, the first danger is the growth in confidence that his nebulous racist mob will likely experience from the affirmation of his election.

In Canada there are two ways we should not respond to the over-confident hate mob:

First, we should not normalize it. Trump was not the only one calling for “unity” under his wing. Canadian politicians, including those local officials with no real obligation to make statements about the election of a foreign head of state, made hasty normalizing statements about accepting the Trump presidency. Prime Minister Trudeau made pains to normalize and ease relations with Trump with a niceguy statement and then even making gestures that he may be open to renegotiating NAFTA. Vancouver Mayor Gregor Robertson was a bit critical of the “bitter” tone of the election (but did not go so far as blaming Trump for that tone) and he called for Americans to “bind the wounds of division,” which is a passive aggressive way to call for tolerance of an openly racist president rather than fighting like our lives depend on it. Normalizing a Trump presidency has the effect of delegitimizing the on-the-ground, militant resistance needed to fight against racist roundups and misogynist and trans-antagonistic attacks, whether carried out by Trump’s non-state vigilante mob or cops and soldiers. It also has the effect of making space for a culture of the hate mob.

Second, we should not pretend the border shelters Canada from this extremist hate. White supremacy, settler entitlement to Indigenous land and wealth, gender and sexual power runs under the border, along older tectonic lines. Like Trump, the anti-homeless hate mob in Maple Ridge irrationally pines for a past that never existed and tries to squeeze it from the bodies of vulnerable homeless people. Trumpism has already swept KKK literature to the doorsteps of white people in Chilliwack and Mission. And the coming Provincial election in BC will demonstrate just how far “grow the economy” resource extraction jobs-first rhetoric will translate into colonial anti-Native racism against land defenders.

When the cultural earth quakes in the United States, the tremors ripple underground up those old colonial tectonic lines and find welcome in Canada. The business-as-usual politician reflex to protect trade relations and posture as reasonable relies on a myth that the rule-of-law will protect people from violence. The fact is that laws (under Trudeau as under Trump) are violence. Laws condemn drug users to death, stop sex workers from organizing to defend themselves, deport people seeking sanctuary, and celebrate murderers in Blue. As political philosopher George Ciccariello-Maher wrote, “if you really believe that Trump is a fascist, you’d better be prepared to do more than just vote.”

Canada’s border will not protect us against hate because it’s already here. The task before us is to fight that hate without apology or compromise. In the dark days ahead we must defend the humanity and the social and living being of our communities, under attack for the very racial, gender, cultural, and sexual differences that make us wonderful, by any means necessary.