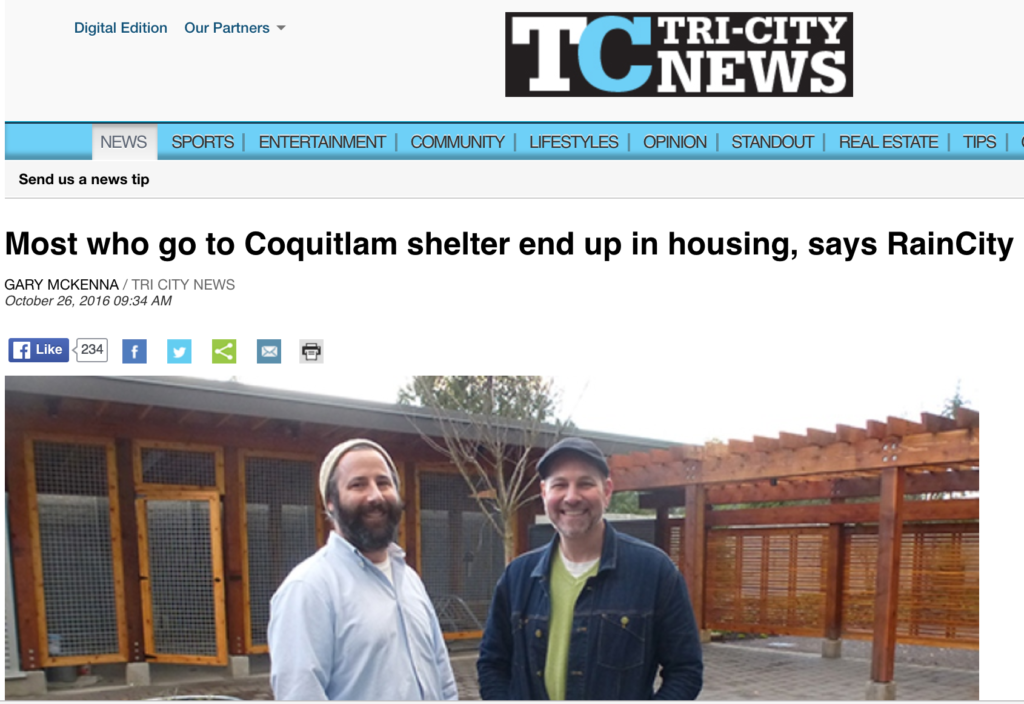 Gary McKenna’s article “Most who go to Coquitlam shelter end up in housing,” reveals RainCity Housing and Support Society data showing where shelter guests move after they leave their Coquitlam shelter. While the information might impress some, all it takes is a critical read to see through it.

RainCity states that 25% of shelter guests since last December’s opening have moved onto treatment or detox. But detox only lasts a week or so, with no guarantee of permanent housing afterwards. And people often can’t go directly to treatment from detox because there’s often no room for them, so they are left returning to homelessness. Many people leaving detox are moved back into a different shelter somewhere else. The same goes for treatment centres. Once you leave treatment you are not guaranteed a place to live. Where will these people move afterwards? Will they get addiction help with the comfort of knowing that they will have safe and stable homes to move into once they’re ready? Or will they be back in the shelter system?

The data states that 23% of shelter guests moved to market housing. Unfortunately, this doesn’t mean that they have moved to a home that they can stably afford or that provides safety. Market housing could mean anything from a dilapidated privately owned single room occupancy hotel (SRO) to an apartment that they can’t afford and will constantly be in debt to the landlord, and eventually evicted. For any low-income person staying in a shelter, moving out and finding an affordable home in the rental market in the Lower Mainland during this current housing crisis is highly unlikely.

Another part of the data lists that 20% of shelter guests move to RainCity’s Transitional Housing. This is something I’ve never understood—in our current rental housing climate, why do we have transitional housing? Where can people transition to if there’s nowhere for them to go? The provincial renting laws in BC (the Residential Tenancy Act) don’t apply to housing considered “transitional.” In other words, residents living in this type of housing don’t have provincial renters’ rights. Is this really something to celebrate—that someone can be easily evicted with no rights protecting them as a renter?

Another part of RainCity’s housing development alongside the shelter is the “supportive” component. And while some people may want to live in a building with support staff, this style of housing is the only investment that governments have been making in recent years. This leaves low-income people without options and forces them to accept housing that keeps them under the watch of staff. Supportive housing often includes guest hours, guests showing ID, staff accessing peoples’ apartments once a month for “inspection,” surveillance cameras in the halls, and other methods of surveillance. This style of housing often replicates institutions rather than a home.

The data sourced in this article doesn’t tell the true story about what this shelter or others like it are able to provide. The truth is that there isn’t enough social housing. Let’s not be fooled, RainCity hasn’t found the magical solution. The solution is a massive re-investment by all levels of government across the country to take housing out of the private market and returning to fund social housing through increased taxes on the wealthiest residents. In fact, when you read this data differently, we could come up with another title for this article: “RainCity Housing hasn’t been able to fix the housing crisis either—housing insecurity continues despite their best efforts.”