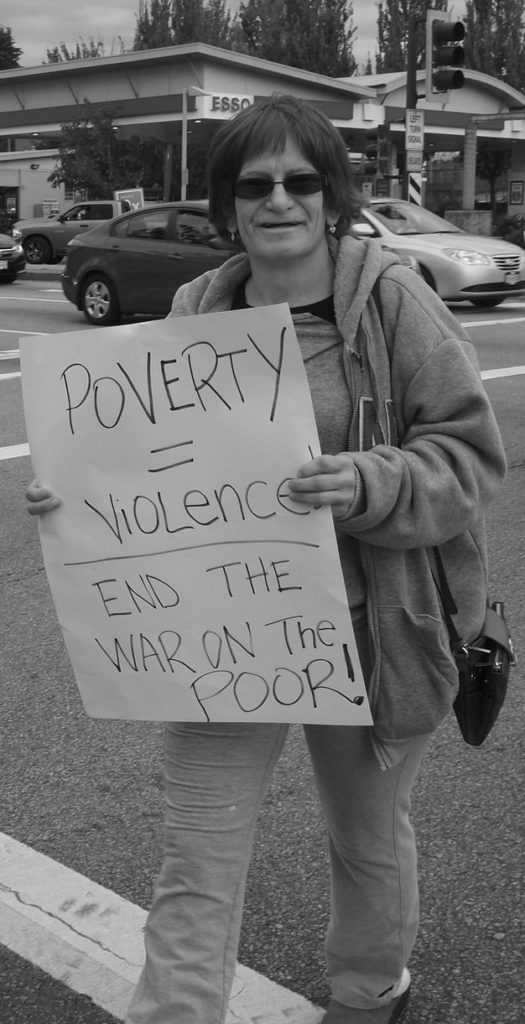 Politicians, government officials, business owners, real estate developers, landlords, and media pundits shape a common perspective on low-income, homeless, drug user, and low-wage working class folks: you don’t belong to the community; you threaten public order; your presence obstructs progress. But within the social context of hate, discrimination, criminalization, and dehumanization, participants at the Together against Displacement and Dispossession summit declared: “We are all persons and we all belong!”

In Maple Ridge, homeless people and former residents of the Cliff Avenue Tent City face vigilante hate and threats of violence. Local residents (aka. Ridgilantes) have organized themselves en mass to oppose the Cliff Avenue tent city, the local shelter, a proposed transitional housing project at the Quality Inn, and a more recent plan for low-income housing. They maintain that homeless drug users should first be forced into treatment before gaining access to housing in the community. The popular sentiment is that they don’t belong unless they can prove themselves acceptable to the social standards of property owners and business interests.

In Burnaby, low-income, working class and immigrant people are facing demovictions on a massive scale. As the municipality grants corporate developers rezoning approvals, affordable rental apartments are being demolished and residents forcibly evicted from their homes and the community to make way for condo towers. A new city development plan to remake Metrotown into the “Downtown” of Burnaby threatens to amplify current demovictions with the displacement of thousands of current residents. To those pushed out of their homes to make way for people with more purchasing power the message is clear: “You are in the way of our development plans; you no longer belong to this community.”

Every morning on the homeless strip in Surrey (135A Street), police and bylaw officers arrive to force people who construct make-shift shelters on the street to take down their tents, pack up their possessions and make everything “moveable.” City trucks dispose of any unwanted items or belongings left unattended in an effort to completely sweep the strip clean of homeless people and their few material possessions, only to have them return hours or days later because there is nowhere else to go. Not only does the state authorize the theft of people’s belongings, it also robs them of health, freedom and dignity through policies that legislate poverty and increase homelessness. And the media adds to these daily rituals of criminalization a discourse of threatened public safety and violence that intensifies social stigma and dehumanization.

In the face of such anti-homeless hate, expanding policies of displacement and escalating war on the poor, people at the summit resolutely asserted their humanity and claimed their rightful presence in their neighbourhoods and communities. The “we are all persons and we belong” point of unity is low-income peoples’ claim to their right to the city. It is their affirmation of their right to exist and to resist against the social oppressions they experience on a daily basis. The fight for a better future means engaging together in the struggle against material and ideological systems of inequality and exclusion and holding fast to the dignity and humanity of those deemed undeserving.