So here’s the situation: Almost 1,000 homeless people have been counted in the Downtown Eastside (DTES) of Vancouver. Bylaw officers and police harass homeless people daily, forcing them to move and taking their belongings if they don’t. BC Housing offers lists of shelters which turn people away because they are overflowing. Tents line Powell Street, pop up in Oppenheimer Park and overflow in the tent city at 58 W. Hastings. People sleep on a bare sidewalk next to First United Church. 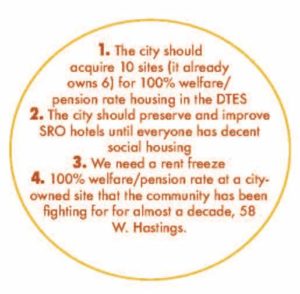 ARGH! What to do? Last January the Carnegie Community Action Project started with 2 Town Hall meetings on the Housing crisis. After the Town Halls came numerous committee meetings, and community members, including Cantonese and Mandarin speaking folks with the Chinatown Concern Group and Chinatown Action Group, refined their demands into the Our Homes Can’t Wait Campaign. We decided on 4 demands.

Hopes and displacement at 58 W. Hastings

On July 9th the Vancouver Area Network of Drug Users organized a housing march and we marched to 58 W. Hastings and set up a tent city. Two days later we went to city hall to demand housing at what we now call, simply, 58. Our group included members of the African Descent community, and the Chinese speaking community. We chanted as loud as we could and the media left the council chambers to come and see where the action was. Our pressure forced the Mayor to meet with us. Weeks later the Mayor came to a packed town hall meeting and the community got him to sign a commitment to designate 58 for 100% welfare/pension rate, community controlled social housing.

As the rains of the fall started three months later and we still have homeless people on the street. The tent city at 58 W. Hastings remained after the Mayor made his promise, but future housing is still only a promise and is not certain. OHCW is fearing that the chance of having our vision of permanent low-income housing at 58 is remote. The city took advantage of Homeless Action Week to chase about 20 homeless tenters out of Oppenheimer Park and take their belongings. And on October 25 the City descended on the 58 W. Hastings tent city and began to force people out of sight into alleys and isolated danger.

The province did say $500 million is available for housing between now and March. That could translate into 325 units for Vancouver if it all went to building new housing. The BC NDP has proposed nothing for 58 or for social housing in general. The feds are talking up a minuscule upping of their contribution from last year, worth about 60 units in total a year for Vancouver. 1,100 of the homeless people counted in Vancouver this year were newly homeless. So the number of potential new units is falling way behind the number of newly created homeless. People are daring to hope that a looming provincial election is a good time to push for welfare increases and the 10,000 units of social housing a year that BC needs. Onward.