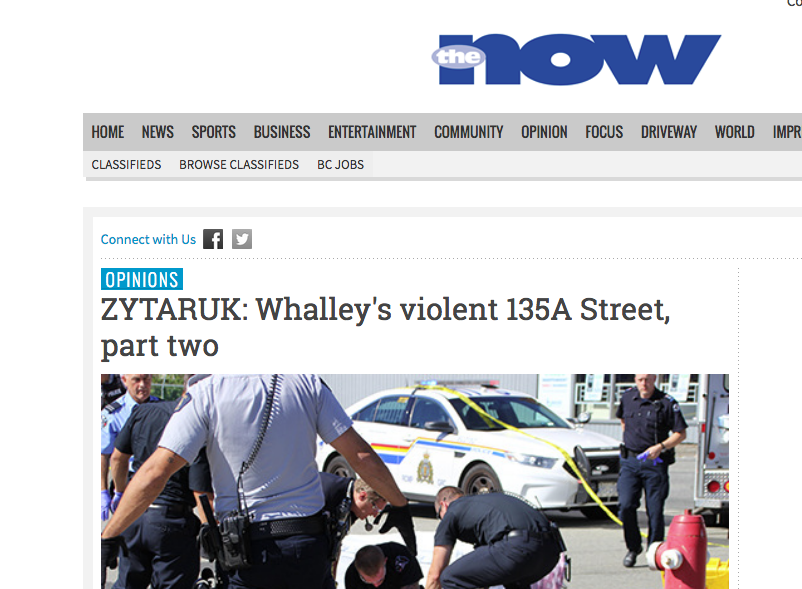 Over the last month, Alliance Against Displacement (AAD) has been holding organizing meetings on 135A Street in Surrey (aka. the strip). Wanda and Ocean, two residents of the strip, had attended the AAD anti-displacement organizing summit in June and spoke of the harassment and confiscation of belongings that homeless people experience from police, bylaw and city workers on a daily basis. A few articles have appeared in the Volcano on this issue, and it has gained some attention in local Surrey media, but Surrey is still stealing from the homeless. And Surrey is stealing more than belongings: police criminalization and media dehumanization also steal homeless peoples’ dignity and safety.

The constant presence of the RCMP constructs the Strip as a site of criminality. Not only are poor people subjected to government theft of their belongings (including medications, ID, treasured photos, family ashes, etc.), they are routinely under surveillance and targeted for potential bylaw infractions and criminal activity. Police cruise the strip with an eye out for people with outstanding warrants, stolen property, and/or illegal substances. Being homeless and living on the strip renders their lives public and visible, and survival strategies or coping tactics for personal trauma and the violence of poverty renders them susceptible to relentless criminalization.

Constant police surveillance and harassment does not mean homeless and low-income people are under the protection of police. In May, the body of Deanna Desjarlais, a 27-year-old Cree woman from Saskatchewan, was discovered in Hawthorne Park, between Whalley and Guilford. She was not identified until September, and family members have criticized police for their inaction in the intervening months. Women on the Strip complained to The Volcano that police have not reached out to those active in the survival sex trade for information or about potential risks after Desjarlais’ death and despite street rumours that a violent man may be targeting women on the streets around the Strip. “The RCMP don’t issue a warning when an Indigenous woman is found dead because they don’t care about us,” one woman said.

In addition to the dehumanizing conditions residents of the strip are forced to endure, their community must also struggle with frequent tragic deaths of family and friends. Every meeting AAD has had on the strip has begun with a brief memorial; someone on the strip had just died due to overdose, health complications, violent encounters, or other causes. Ken, Darcy, Troy, etc. etc., the list goes on and on. These losses are felt deeply by those who live and care for one another amidst the circumstances of political neglect and social stigma.

In a recent opinion piece in the Surrey NOW, writer Tom Zytaruk recounts a selective list of the violent deaths that have occurred on the strip over the past few years. On the basis of these tragedies, he advocates for the residents of the strip to be forcibly removed and the area demolished, encased in concrete, surrounded by a moat, and circumscribed with high-voltage razor wire.

Zytaruk, perhaps giving voice to the opinion of others, seems to think that the violent deaths that have occurred along the strip are the fault of those who are forced to survive along 135A. He lavishly employs pejorative descriptions of the strip – “deadly, god-forsaken,” “grim strip of road,” “absolute complete disaster area,” “tragic human failure” – but he fails to recognize the community of care and mutual support that exists in this space. His opinion is a terrible instance of victim blaming and it demonizes people who reside there.

But perhaps the worst thing about his hateful verbal assault on the community of 135A is that it masks the deep, dehumanizing, daily violence of poverty, homelessness, racism, male violence against Indigenous women, and the criminalization of survival strategies legislated by all levels of government. A recent study by Megaphone shows how homeless people die much earlier that those with housing and experience higher levels of violence and poor health. Who are the perpetrators of this routine, normalized suffering and death?

Zytaruk argues that street-level violence within communities of poor and homeless people calls for their ruthless displacement, as if that would put an end to violence resulting from systemic social injustice. Instead we should forcibly remove those with political and economic power who construct and uphold the social conditions of poverty and force people to endure the violence of daily survival on the streets.