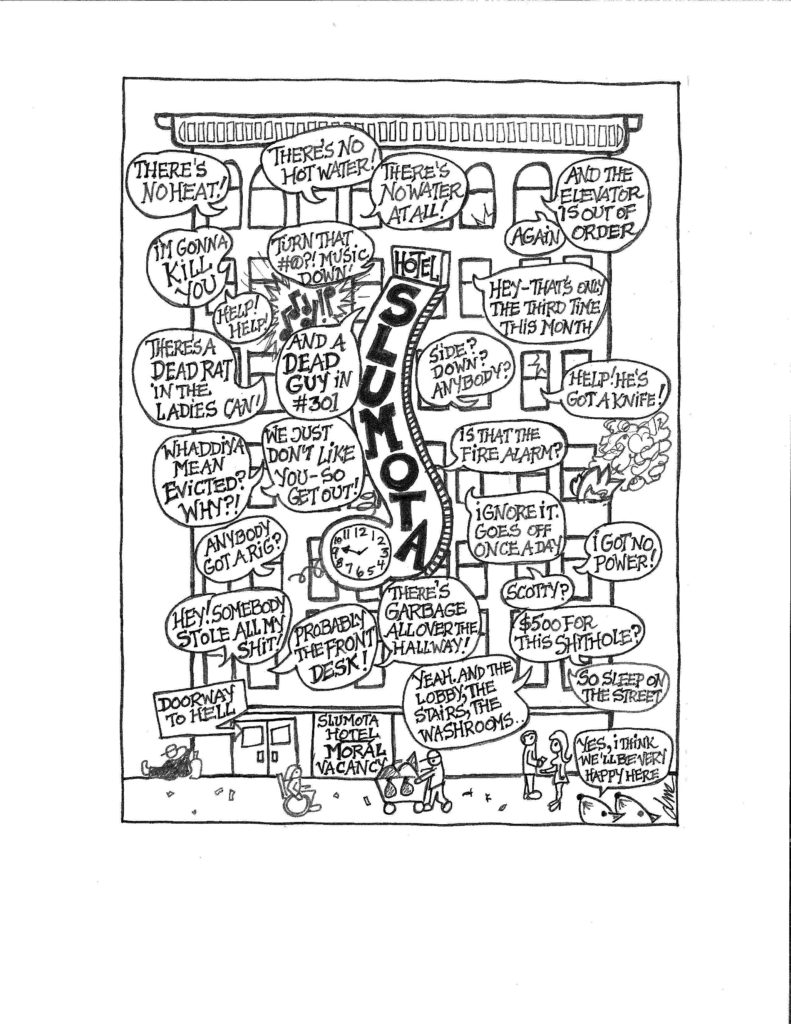 The plot thickens at Vancouver’s notorious Regent Hotel. The building has 153 single room occupancy (SRO) rooms renting at around $450-$550/month to mostly people on welfare and disability; and it is in deplorable shape. Tenant Jack Gates has been working with the SRO Collaborative, a new group that wants to improve the habitability of SRO hotels and get the city to enforce its Standards of Maintenance bylaw. The law allows the city to give 60 days’ notice and do needed work and bill the owner. Needed work includes permanently fixing the elevator which breaks down frequently, getting proper heat and hot water, getting rid of rats, fixing the facade which is falling off, and repairing the fire escapes which are partially detached from the walls and have been shortened by Sahota staff with a hacksaw.

Gates and his lawyer Jason Gratl have been involved in two legal actions against the Sahotas. First is a possible class action suit against the City and the Sahota family which owns the building. “For the tenants he’s [Gratl] asking $200 a month for every year that they’ve been there and a reduction in rent to the welfare shelter rate, for putting up with the conditions here,” says Gates.  The other tenants are “all for the class action,” says Gates.  “Some are even asking if there are any papers for them to sign yet but there aren’t.”  Gratl says this case could take a year to be certified by a judge.

Gratl says they want two things for the court case: “We want the building fixed and we want the tenants compensated.”

The second action is a request for a court injunction. According to Gates, “On September 24 Gratl gave the city 60 days to use their powers under the Standards of Maintenance Bylaw to fix the whole list of repairs and bill the Sahotas, or he threatened to ask a judge for a million dollars so the tenants can hire proper licensed contractors to do the work themselves.”

Meanwhile Gates says maintenance in the building hasn’t improved, even with all the media attention and legal threats. “They’re not even mopping the floors on a regular basis; toilets are still flooded and security isn’t adequate.”

“I’m kind of shocked that the City hasn’t enforced stuff with all this attention,” says Gates. “It’s in the bylaws that the City can fix up the building, like Jason and I want, hire qualified professionals, and then make the Sahotas pay. They won’t do that. They’re the biggest slumlords of them all, the city.”

There’s now a rumour that the Sahotas want to lease the Regent to another SRO slumlord on the same block of Hastings, who would evict Regent tenants and put in their own. Another fear is that a structural inspection ordered by the city would result in the Regent being closed down and 153 tenants evicted. “But we’re not going to let that happen,” says Gates, who is starting to ask others in the community for support and solidarity if the Regent is turned over to another slumlord or closed by the city. “If it comes up that we’re supposed to move, I won’t move. I’ll sit in my room until the cows come home. People need their homes and this is what we have,” says Gates.

Fighting Capitalism & Colonialism to Heal in Community – Our View on Addiction: By the Editors