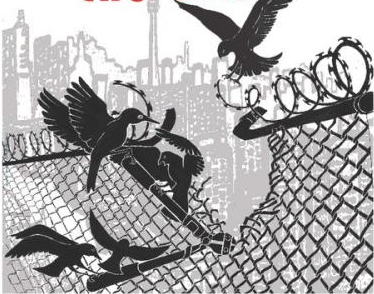 Carole is a ghost mama

ground zero for the revolution

while Jessi is in belly, before Jessi’s bug eyes can open

Carole shows her the world

Carole flies through a sky as big as an ocean

her oil slick hair streaming behind her for eight city blocks

murders of infant crows clutching strands of it

descends to his window

she hears him singing

lower, lonely, filled with the longing that put Jessi in Carol’s belly

to his loves he sings

you see, I can make it rain when I want it to

to his call she responds

I, I can fly like a bird in the sky

Jessi was lucky to get a golden halo

they let out Jessi’s dad to look after her

once the price of her mama was extracted

knowing that there are possibly more red children than since contact

knowing there are even more babies, ones who avoided becoming state stats

unregistered babes taken to the woods

knowing this she dances

and she puts her back into it

about G4S regulating prisons in Palestine

In more ways than you might realize, G4S is securing your world.

big enough for all the babes of the red nations

then starts weaving a net to capture G4S execs

puts on headphones to speed her work