While governments make pronouncements and dither during the overdose public health emergency, who would you think would actually be out saving lives of people who overdose? Police? Ambulance workers?

Actually, while those people have saved some lives, the real “angels in the alley” are people who’ve used drugs themselves, got trained in harm reduction, learned the correct protocol for using Narcan, taught others how to use Narcan, and go about their days saving the lives of others.

As Laura Shaver says on the next page: “We’re ready and responsible. Drug users who care.” Because of these folks, hundreds more people are alive today. This issue’s centerfold is dedicated to some of these people and shares parts of their stories as life savers. 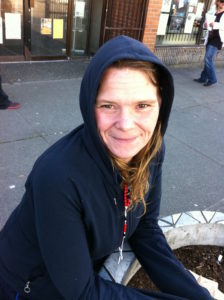 A week or two after the tent city opened [at 58 W. Hastings in Vancouver] I got a call at 3 in the morning. I got my Narcan kit and went to where the person was overdosing. We were all so nervous. I had the training but none of us had done it before.

I was so shaky I couldn’t fill up the needle at first. But then I jammed it into his leg. Someone else was also giving him CPR. We waited the 3 to 5 minutes. He was gray. He looked dead. But we knew we could save him. So I Narcaned him again and we continued the CPR. And then a third time. I’m thinking, “is this too much Narcan?”

Someone gave me another Narcan kit because there are only 3 syringes per kit. I gave him another shot. The minute the fourth got into his system, he gasped and started freaking out. He wanted to get up. We were like, no, you have to wait for the ambulance.

It feels really good. If it wasn’t for VANDU and the training I wouldn’t be able to do it. I’m thinking everyone should get the kit and the training, especially cops and fire fighters. 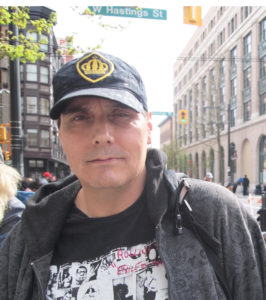 When we had the VANDU injection room before Coastal Health shut us down I was the RPIC (Responsible Person in Charge). One fellow was known for overdosing so we watched and sure enough he went down, so we have a protocol: Yell OD and call 911.

People jump into action. Two come to the injection room, the RPIC and the supervisor. Diane Tobin and I went in. I got the Narcan and administered it. It didn’t seem to work so we administered a little bit more and he seemed to come to. Meantime, the front desk was on line to 911 and they were asking questions and relaying them to us. As he was getting more coherent but still foggy, the paramedics were here and took over.

You act so quick you don’t think about how you’re feeling. But then you think, my god, that person was almost dead. Thank god for naloxone. I have also witnessed other times when someone has gone down and been brought back. This makes me understand that the injection room we had, whether legal or illegal, was very necessary.

Without it people will be using in the alleys with no supervision and there’ll be more deaths.

It’s like that saying, “You can lead a horse to water but you can’t make him drink.” You can introduce people to recovery or a judge can sentence them to recovery, but it won’t work unless the person really wants it. So at VANDU we keep people safe while they’re in their addiction with the injection room and with education around harm reduction.

I didn’t feel like a hero. I just felt really good that the person is still alive cause of what I’ve learned at VANDU. 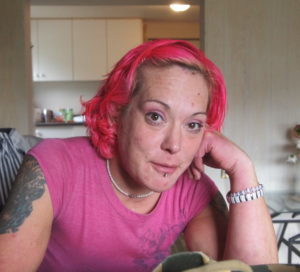 The first time I Narcaned someone was at MCC, the thrift store on King George. People go there to hang out if they don’t want to be on the strip. There was a guy who had been found overdosing quite a few times. I found him that day and he was all by himself. There was no one around and there he was sitting on the platform and he was all blue.

So I ran down to the fence and yelled for Narcan and people started scurrying around. They gave me the kit and I was running up to him getting the syringe ready and I stuck the needle into him and then started giving him CPR, because there was nobody around to help. A couple of minutes later the people from the

Front Room [Drop-in and Shelter] arrived. And he made it. It felt good saving a life, but at the same time it felt futile because I knew that he would be found overdosed again.

“When someone goes down on the strip it is kind of a melee. Someone would scream “Narcan!” and suddenly 20 people would be screaming Narcan. The staff come out of the Front Room but have no concept of where the first call came from. People just get frantic and they freak out and start screaming, and it’s not necessary.

The ODs seem to come in waves. There was a big wave in the summer time but I haven’t heard of quite as many as of late. But I can feel it in my stomach that we’re going to have another one of those waves.

I don’t know about solutions to this crisis, but a safe injection site would be ideal. 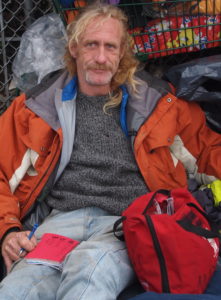 I have 7 so-called “saves.” A good friend of mine was in the bathroom of the Front Room. He dropped and I had to spike him. The Front Room staff came and took over after that. I wasn’t very happy because I had saved my friend twice that week, and he went down a third time. I hit him once and then walked away and let the staff take care of him. It is really frustrating when the same people go down time and time again, especially if it’s a friend.

The first time I Narcaned someone was when a person pulled up in a car in front of Heads Unlimited [auto repair shop on the strip] and dropped off a woman who had overdosed. I was sitting out front playing on my phone when they pulled up. I had a brand new Narcan kit. There were 10 people standing around saying do this, do that, but they weren’t doing anything. I just went in and could see she wasn’t breathing. I gave her a good chest rub but that didn’t do anything, so I hit her with Narcan. I was waiting to give her the next shot when the ambulance guys showed up so I stepped away.

Narcan kits are pretty available here; you just have to go through an hour-long session where they show you videos and take you through the steps, and basically you’re able to treat someone. We get a couple of 4 ml vials, and ambulance attendants have 8 ml. You’re supposed to hit them once, and wait for 5 to 7 minutes and if there’s no response then hit them again. I usually hit them once, then suck up another one and if there is no response in 3 minutes hit them again.

Responders are pretty quick around here. The staff of the Front Room run out with kits, and they do a good job. A while back, there were 36 calls in a 24 hour period. The newspaper said this was the safest place to OD; must be the highest number of Narcan kits per block. 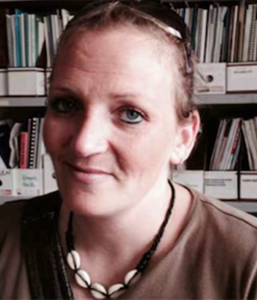 The passion explodes from Laura Shaver’s voice. “They can stop this by letting us do what we do best, harm reduction. We know what works. The government and health ministry just need to make it happen.” Shaver is president of the Vancouver Area Network of Drug Users and vice president of BC Association of Persons on Methadone. She figures she has helped save about 10 lives.

The most stressful time she helped save a life was at a campsite in the Okanagan. “At about 2am someone was screaming my name in a panic. I was looking for my naloxone and my flashlight, running to his tent. I listened for his breathing, called his name. But all I could hear was this guy gurgling.

“I pulled out the naloxone but there was no plunger. Someone ran to get another. I was doing mouth to mouth and someone gave him another shot. It was crazy. I was doing chest compressions with a flashlight under my chin. Finally the ambulance got there.”

VANDU had a safe injection site for about 2 years and saved 40 to 50 people who overdosed. “We had a sharp protocol,” explained Shaver. “I would yell, ‘call 9ll.’ Then we do naloxone, chest compressions and mouth to mouth. We were ready and responsible. Drug users who care. Because of that no one died. It shows how important safe injection sites are.”

Two years ago Coastal Health shut down the VANDU safe injection site. “Think of all the people who are dying cause we can’t help them now,” said Shaver. “We don’t need more research. Lives were being saved until they shut us down. Every time someone I know ODs I want to send their picture to Coastal Health.”

“Now that there’s a health emergency [because of fentanyl] this is insane.”

“Maybe liberation is within reach”: Palestinian resistance against Israeli settler…