Surrey Steals from the Homeless and We Won’t Take it Anymore: By the Editors 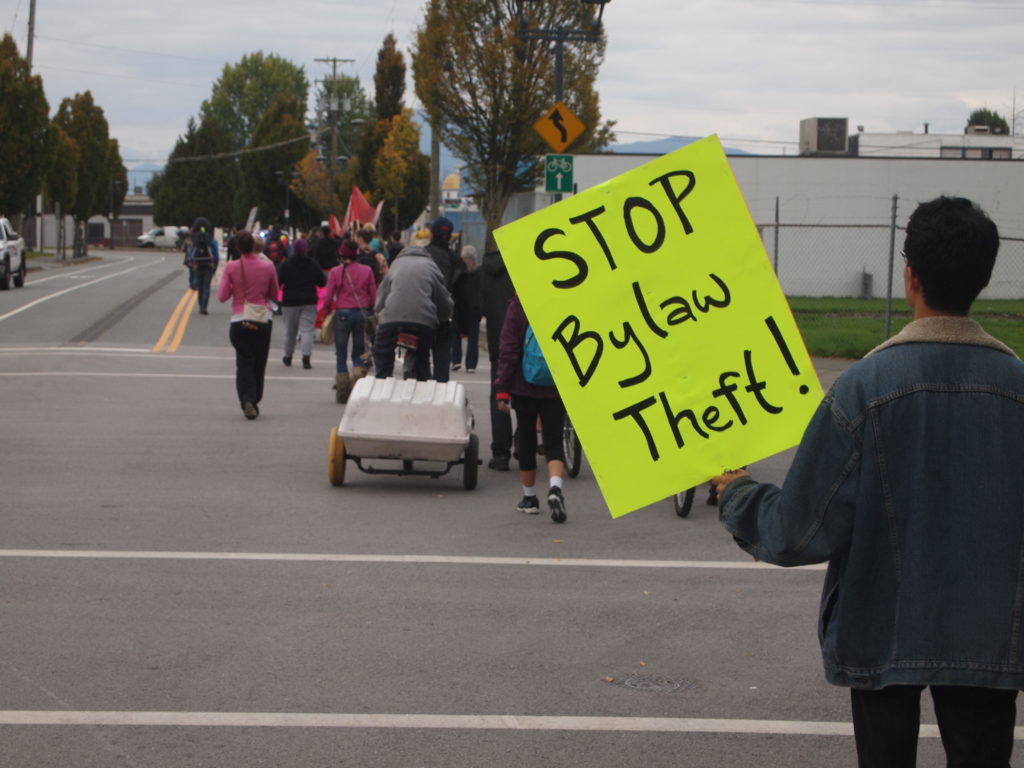 An hour before “Surrey Steals from the Homeless” demonstration was set to start on Monday October 3rd, the organizers were feeling a bit desperate. Wanda had been grounding the weekly meetings on the 135A Strip, talking people up and convincing them to come sit in a circle and figure out how to formulate demands out of their biggest common struggles. She was having a hard time getting people to come over by the sound system and the newly painted banner that read Homes Not Theft. “They’re scared to leave their stuff,” she said. And, as if on cue, a City garbage truck slowly drove by, implicitly threatening all hundred or so people down the strip with the familiar danger of the bylaw officer confiscation and destruction of all their worldly possessions. And not only theft, two different women explained that they wouldn’t march because if the cops saw them protesting they would face retribution later. “No one can protect us from the police,” one said. It was clear, just before the protest began, that the reasons were had to fight were also obstacles to that fight.

But something happened when some television cameras gathered around Wanda. Not wanting to leave her alone with the bleak, empty street thronged with tents as the only backdrop to her interview, her friends picked up signs and gathered behind her to clap and cheer when she made the point well. They kept the signs when Herb Varley from Alliance Against Displacement called them over to start the rally. They sang along when Mona Woodward opened the rally with the Women’s Warrior song and her drum. Residents of the Strip were not standing alone. They were joined by members of the Vancouver Area Network of Drug Users and others from the Downtown Eastside, and by about two dozen housed allies from Surrey. A feeling of anxiety and fear no longer hung over the rally. The people gathered more than sixty strong had transformed that worry into resolve.

The rally was strengthened by the added numbers of allies, but the real focus was the experiences and demands of the homeless residents of 135A. After a few brief speakers on the Strip, the rally took to the streets and, chanting “Surrey steals from the poor! We won’t take it anymore!” they took the Strip to face the mayor at city hall. On route, the marchers proudly took over King George Highway and then 104th street before marching up the steps and pushing past security guards into City Hall. Inside City Hall the demonstration stalled outside the locked door that closed off the room where Council was meeting. There in the lobby, with RCMP lined up, arms crossed across the room, the voices of 135A rang out.

Christine, who has lived on The Strip since January explained that bylaw officer theft of her belongings keeps her from accessing services like food servings, and feels like punishment for having no where to go but the street:

Christine: I was in the Front Room eating & bylaw took all my clothes, blankets, all my stuff #surreysteals pic.twitter.com/Y8ZamFJrEt

All of Brad’s belongings were stolen and destroyed by bylaw officers while he was sweeping the street, keeping his community clean. Although the City claims they keep peoples belongings for fourteen days, he says that when he went to retrieve his things they had been taken to the dump.

Brad left his things to sweep the street & bylaw confiscated it all, took it directly to the dump #surreysteals pic.twitter.com/IBkqwwuyOY

And a young woman resident of the Strip said it feels like outsiders don’t understand what is being stolen from the homeless. The City talks about it like its trash, but its everything people have, from the tents they need to survive, to “precious things” like the ashes of lost loved ones. “They don’t consider what they’re doing to us,” she said.

They take our precious things and don't even consider what they're doing to us #surreysteals pic.twitter.com/RQnreoHESp

The rally in City Hall closed with the crowd decrying the dehumanization and criminalization of the homeless in Surrey. Wanda, holding the “Homes Not Theft” banner, shouted out that 135A is the “heart” of Surrey. “We are a community full of love for each other,” she said. “We depend on each other to survive.”

The demands of the march, which no one from the City met with the protesters to receive, were:

The “Surrey Steals” march changed the feeling on The Strip. Residents walking back to the Strip broke out in spontaneous chants, and they were smiling, they were feeling defiant.