Metrotown residents speak out against yet another Corrigan demoviction

On Tuesday September 20th Burnaby City Council held a public hearing for an application by Polygon developers to rezone, demovict, and demolish seven more buildings with thirty-five apartment units and seventy tenants. Only after Burnaby council votes to amend their zoning laws for these properties can Polygon replace them with condo towers that none of the displaced residents can reasonably be expected to afford. This rezoning process has become routine, and none of the opponents gathered at City Hall expected Council to heed their protests. But nevertheless, Metrotown residents and housing advocates gathered to speak out to demand that council turn down this development application, declare a moratorium on all demolitions of rental buildings, and stop the disastrous “downtown” Metrotown plan.

About twenty Metrotown residents and activists, including six people (two of them young children) who stood to be displaced by the rezoning, showed up to speak against the Polygon rezoning application. Not one person spoke in support of the application.

Anthea Alexander, who celebrated her 75th birthday the day before the hearing, said that her pending demoviction makes her feel “helpless.” She testified to council,

What is there for me to do? I’m on the BC Housing waitlist. I’m a low-income senior. There are 16,000 people ahead of me. I’ll be dead before I get into a place. I never thought I’d be in this situation. I retired in this apartment thinking I’d be there until I couldn’t handle the stairs anymore. But now I’m going to have to move into my niece’s place, into her daughter’s room. I will not have my own place anymore. I have a wonderful niece but I’ll be homeless in her house.

Anthea came to the hearing with her neighbour who, dressed in a hat and sunglasses, was too intimidated to speak out. She said that she doesn’t have a family home to move to, so she expects that when she is demovicted she will move into her car.

Out of the nine people I met who were demovicted from 5025 Imperial [the building occupied in the Anti-Imperial Squat in July], four are homeless on couches, one is homeless on the street, and the other four are in places they can’t afford. This council is discriminating against people on the basis of class.

Matthew Hunter, who was demovicted from a building around the corner from the buildings being rezoned, said,

When I was demovicted I found a new place on McKay Avenue. The landlord said there were so many people applying for the apartment that he put all their names on pieces of paper in a bowl, mixed them up, and chose one, like a lottery. I only got a place because I won the lottery.

Councilor Volkow asked Matthew if the compensation he got for being evicted was a help. Matthew said,

The money they gave me for compensation paid for my moving expenses but my new rent is higher so it doesn’t help me ultimately. The eviction makes my life harder and I worry it’s going to happen again at my new place.

Sadie Morris, a Nuu-Chah-Nulth and Irish resident of an apartment a few blocks from the rezoning site, and an activist with the Stop Demovictions campaign said,

Metrowtown matters to me because my daughter and I are visible minorities and we feel accepted and safe here. I am not able to work, I am low-income, and I will never be able to afford a condo or a house. And I want people like me to be part of future plans for Burnaby.

Sherry Chen, who was demovicted from her long-time home just last year and would be demovicted again from the building being rezoned, spoke to the problem of an absence of rental housing and the need to protect what was there.

How many rental units have been built up in Metrotown? We don’t want three months’ rent. We want places to live. There is nowhere for us to go. There are no homes or apartments for us to move into.

Erika S, a resident of an apartment near the Metrotown skytrain station and an activist with the Stop Demovictions campaign, said,

Burnaby residents are not disposable. You cannot build just for the rich. We need affordable housing for the regular people. My opinion is – replacement of rental housing before displacement of renters.

The amenity that people of Burnaby need is a roof over their heads and a community around them. It is time to pause this process until we can secure our people’s homes. 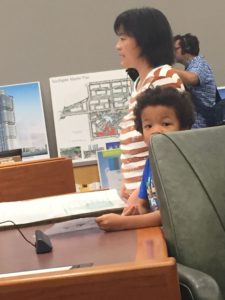 Other residents elaborated these themes, that Burnaby Council is valuing condo development over the lives and security of people vulnerable to displacement. Leslie Madison said, “Every demolition increases the strain on the existing rental stock and reduces the number of apartments where we can live.” Nancy Yee showed that her life is an example of these losses. She said, “I was pushed out of Burnaby even though I didn’t want to move.”

David, who was demovicted last year with his wife and two young children, would be demovicted again by this new rezoning. He spoke near the end of the hearing with a heavy-hearted appeal to council to listen:

Please give it serious thought when you make your decision. Make it while thinking about the Burnaby people, not just the developers. We have to build a city for the people. I work and pay taxes and I don’t know where I’m going to go. I know I can’t afford to buy, and now I can’t afford to rent.

Burnaby Council did not prove warm to these testimonials. Against the appeal of young political science student Kathleen Yang for council to pay attention to the worries and demands of those affected, Mayor Corrigan came out swinging, attempting to mock and belittle her rather than respect and encourage her participation in the hearing. And in reply to Nancy Yee’s questioning of Council’s refusal of responsibility for rezonings, Mayor Corrigan snorted and laughed at her for quoting Premier Christy Clark about municipal legal responsibilities.

As chair of the rezoning hearing, Mayor Corrigan seemed to reserve his sharpest barbs for women, and particularly racialized women. But this tone was extended generally to everyone who spoke against the proposal, continuing a pattern of Burnaby council’s hostility to community critique.

In the end Council voted quickly, without question to staff, and unanimously passed the rezoning application through to second reading, putting it one step closer to its seemingly inevitable passage.

Why Read? Holding education and discussion groups as organizing strategy: By Natalie Knight