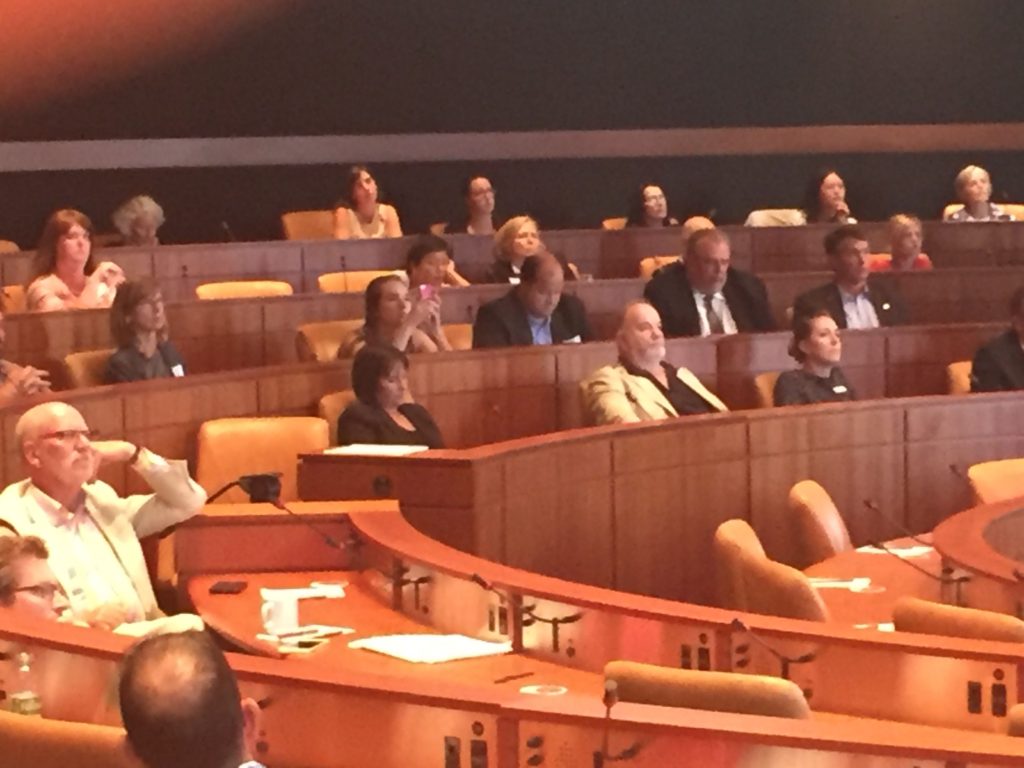 On Wednesday September 14 the Trudeau Liberals held a consultation meeting in Vancouver for a “new national housing strategy.” This meeting was part of their cross-Canada process that includes a website and survey, which they bragged has received three thousand submissions, and meetings with “stakeholders.” Alliance Against Displacement (AAD) was not invited to the consultation, but we joined other gate-crashers like the DTES Women’s Centre and Battered Women’s Support Services to sit with suited-up developers, executive directors of social service agencies in suits, and BC Housing employees. What, we wondered, would be “new” about the Trudeau housing strategy? And why would the same people who created the crisis be the ones tasked with solving it?

Jarred by the all-suit homelessness consultation

Four members of AAD arrived at the meeting at the beginning of the lunch break, when BC’s Housing Minister Rich Coleman was scheduled to give a keynote address. We planned to disrupt his speech and distribute copies of our statement with our two priorities for a new federal housing policy: to stop the criminalization and displacement of low-income and homeless people, and to build 77,000 tax-funded units of social housing every year across Canada. But Coleman’s speech had been moved to the early morning. Instead of a dramatic disruption, we joined the sessions. 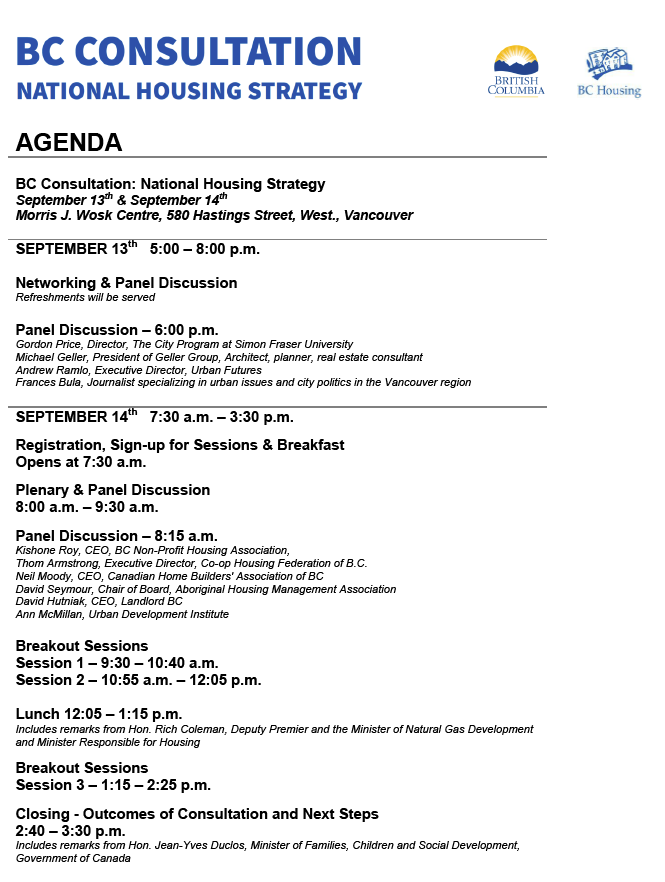 I found it jarring to enter the meeting space. Most upsetting was the fact that there were no low-income, homeless, working-class, Indigenous, migrant, renter victims of the housing crisis in the room. Conference organizers would not give us a list of attendees, but the list of speakers was public. The AAD statement explains the problem with the speakers’ list:

The stage of the consultation in Vancouver is cluttered with the very real estate developers, provincial housing budget axe sharpeners, “grassroots” NIMBY pro-displacement activists, and “innovative” supportive housing overseers who are responsible for the destruction and sell-off of social housing resources and Vancouver’s record-high homelessness numbers this year. Where are the homeless people… those who face the hate of anti-homeless vigilantes… the activists and grassroots researchers who know that “Housing First” is a failure, that free market real estate makes people homeless, it doesn’t end homelessness? They’re not at Trudeau’s good looking, do-nothing consultation. But “Landlord BC” is. The anti-poor zealot Michael Geller is. “Condo King” Bob Rennie is. And “BC doesn’t build social housing” Minister Rich Coleman is.

But even knowing who would be there didn’t prepare me for the smug posture of BC Housing CEO Shane Ramsay, who dismissed my complaints about the narrow invite list scrubbed of critics by saying “I’ve heard your rhetoric before.” And it didn’t prepare me for the indifference of the grinning, hand-pumping bureaucrats as they stroked the egos of millionaires and discussed tax incentives, public private partnerships, and “revamping the on-reserve land title system to create leverage to build more housing” (AKA terminating title for fee-simple private property ownership on reserves). It felt like going to a meeting about workplace safety amidst an epidemic of deaths and injuries on the job and finding only bosses, shareholders, and foreman sneering at the table. 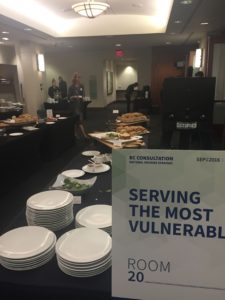 We went to one break-out session, on “serving vulnerable populations.” We pushed our two main points to the private consulting firm facilitator hired to run the consultation. “Raise taxes to build 77,000 units of social housing,” we said. And “stop building supportive housing and pouring money into rent supplements that go into landlords pockets and don’t build any long-term public infrastructure.” The Executive Director of Pacifica Housing, a massive service provider on Vancouver Island, captured the more dominant feeling in the room when he declared that he was interested in “bigger issues” than federal funding for social housing. His “bigger” issue was new federal laws and regulations that will help agencies use “more institutionalization for those who need it.” Other service providers agreed. From their perspective supportive housing “works well” to “serve vulnerable populations,” and rent supplements “help agencies help people” whose welfare shelter rates are too low to pay market rents. You can probably guess which points the facilitator chose to highlight as agreements from our breakout group.

During our breakout group, Dean from Pacifica hit on another theme that was repeated throughout the day, and which seemed to undergird the entire consultation: was a new federal housing program to mark a return to the old federal housing program of the 1970s? AAD went to the consultation with a similar question. Dean’s perspective was that the federal government should not return to the sort of “tax based” social housing programs that built so many buildings in the 1970s because it proved to be “not sustainable.” In the 1980s and 90s the government scrapped this funding. Dean took that as evidence that any similar tax-based program would inevitably be scrapped as well. The new federal housing program, he argued, should be “self-sustaining,” which means based in market partnerships, and if not revenue generating, then at least sustaining lower-income rents with subsidies generated from higher-income rents in the same building. In other words, not tax-based or wealth-redistributive, and not social housing at all. Not coincidentally, Dean thought we were conspiracy mongering for arguing social housing cuts were part of neoliberal policy and a global right wing offensive.

When we rallied in June outside an all-Ministers housing meeting in Victoria, Federal Minister Duclos tried to approach our stage to pose in support of homes. We challenged him to name the numbers of social housing units that would be built by the Trudeau Liberals and he refused. As he walked away, we chanted “Trudeau lies, people die.” Later, the Mayor of Victoria criticized us for not giving the new Federal government enough of a chance to demonstrate which side they’re on. Any doubts should have been cleared up by this Vancouver consultation meeting, and particularly by Minister Duclos’s closing comments.

“House prices in Vancouver,” he began, “have increased thirty percent in the last year. Young families fear they cannot buy a home.” And the high cost of buying housing is a challenge for these families, “and for society,” he said, because it “puts Vancouver at a disadvantage in the global competition for talent.” And it also produces a financial risk for development. “That’s why the national housing strategy is so important.”

We waited for a word on homelessness being at record levels. For a mention of a hundred thousand hidden homeless just in British Columbia. Instead he closed his talk by summarizing that “issues important to the Lower Mainland are affordable market rentals [his only mention of renters at all] and affordable home ownership.” To deal with this home ownership crisis, and the specific challenges faced as “BC is attracting interest from outside investors,” he would focus on reinvigorating the Canada Mortgage and Housing Corporation (CMHC). But allaying the fears of developers in the room (voiced by Michael Geller), he qualified this reinvigoration. “Let’s not go back to the future. We will not go back to the ‘golden days’ of the ‘70s in the CMHC” when the Federal body funded and built social housing, funded and supported coops, and carried on a massive regulatory role correcting against as well as encouraging market forces. Developers and agency people like Dean from Pacifica were anxious about the spectre of a born again CMHC because it could mark a return to social democratic government policies. Duclos explained that “there will be a new golden day of the CMHC.” It’s no longer the 1970s. “We have market tools, social innovation, and expertise we have developed since then. And CMHC is acting on a mandate to find new ways to conduct its work.”

There was one big piece missing. As Duclos was wrapping up his talk, Letizia Waddington from AAD leapt to her feet and shouted, “Not a word about homelessness?” Duclos paused a moment and said: homelessness captures a lot of media but the government is prioritizing action on the housing crisis that affects “most Canadians.” The work the Trudeau Liberals will do for homelessness will concentrate on “bringing Canadians off the street and into homes” where they can contribute to society. But what that work will entail, he did not say. And for all the talk of a “new” housing strategy, the main message from the Trudeau consultation on housing seemed to be that it would be “new” in that it would not resemble Federal housing strategies of the age of the welfare-state, not because it would represent a break from neoliberalism. Same new, same new.