Tent Cities Unsafe for Whom? Report from the Langley Homeless Camp in Nicomekl Park 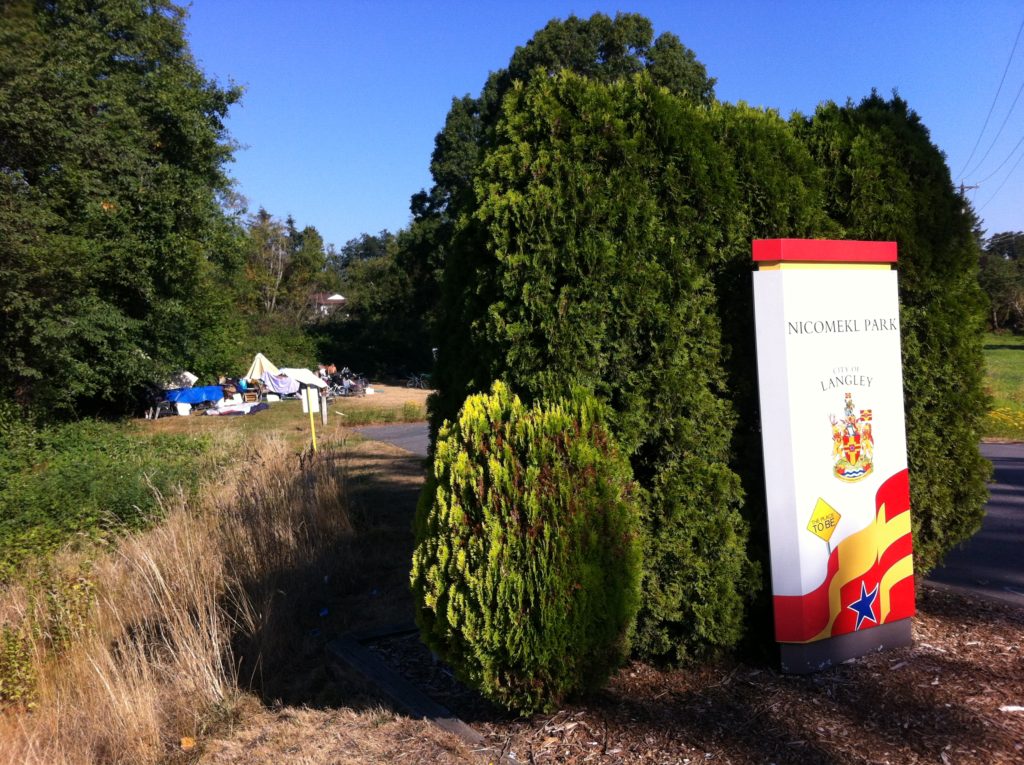 About three months ago, Darcy and his friend Kathy set up a tent at the edge of a floodplain in the City of Langley’s Nicomekl park. They had been displaced from their previous campsite and thought the park offered a visible location and some distance from the nearest neighbors. Soon, more tents went up in the nearby trees and bushes of the floodplain. On Friday there were nine tents in the main floodplain area and Darcy estimated about twelve people living in the camp consistently. According to Darcy, this is unprecedented in Langley, “They have never allowed us to congregate anywhere”. In his ten years of being homeless in Langley this is the longest he has ever been able to stay in one place. Perhaps this is due in part to last year’s BC supreme court decision that cities can no longer prohibit overnight camping in public parks when shelters are full (Langley had at least 92 homeless people as of 2014, and one shelter with 32 beds). Whatever the reason, some stability of place is a welcome relief for homeless folks in Langley who are accustomed to a cycle of near constant displacement.

Though the camp hasn’t yet made contact with the several other homeless camps in nearby cities, Darcy pointed out that the rising number of camps in the Lower Mainland is a “sign of the times”, indicative of the increasing unaffordability and inaccessibility of housing to people with barriers to housing. “None of us here want to be homeless”, said Darcy, but many camp residents became homeless after being discriminated against in a viciously competitive rental housing market or evicted without cause while in a vulnerable situation. 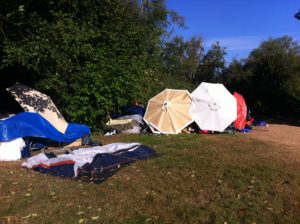 The camp is highly visible to motorists on busy 208 Street adjacent to the park. Darcy said the camp’s visibility has meant supporters have come to drop off supplies for the campers, including tarps, water and food. A few local contractors have also stopped in to offer day labor jobs to campers. Darcy hoped that the visibility would help passersby understand that homelessness does exist in Langley, and that someone driving by might be able to connect residents to accessible rental housing. However, the visibility has also meant the camp has begun to attract negative attention, including honking and yelling from passing cars. Darcy wishes outsiders who have an issue with the camp would come talk to the campers directly and see if they could be addressed in a way that works for all.

However, most of the criticism of the camp has evolved in local news media, rather than face to face conversations with campers. An angry editorial in the Langley Times in July decried the camp as unsafe, crime-ridden and an affront to the rights of “taxpayers” to enjoy public parks. Several articles since then have focused on the camp’s “alarming” growth, and rising concerns with the camp’s “safety”. Langley City Mayor Ted Schaffer has been somewhat supportive of the camp, saying in a Times article that, “they deserve housing” but then abdicating all responsibility for this to the province. In another interview Schaffer added to the narrative of the camp as an unsafe place by suggesting that anything other than “supervised” supportive housing for camp residents would be “inviting chaos”. He went on to suggest that part of the solution is provincial funding for an ACT team in Langley who would be able to “understand” the residents of the camp, as if the real problem of the housing crisis is the incomprehensibility of homeless folks.

In the meantime, the city continues to send bylaw officers to the camp each morning to “check up on things” and advise residents that they must take their tents down by 9am each day. Darcy told me there have also been visits to the camp by RCMP, including one particularly unsettling encounter with a lone, plainclothes RCMP officer. Chillingly, the officer told Darcy, “You had better leave before you get burned out…” Darcy asked him to clarify and he said “I mean like, gasoline poured all over the camp and burnt”. Darcy said he didn’t want to “fearmonger” but he took this as a threat.

When asked what the city could do to help the camp Darcy said it would be nice if they could take an active role in facilitating conversation between the camp and nearby homeowners to address complaints with certain aspects of the camp and defuse tensions created by the perception that the camp endangers the safety of the public. Decreasing harassment by police and bylaw officers would probably also be nice, and could contribute to a safer environment for all where homeless folks can find some temporary solace, and safety, in camping together rather than remaining isolated, and constantly displaced.

To sign up to our newsletter, visit the link in the right hand column!