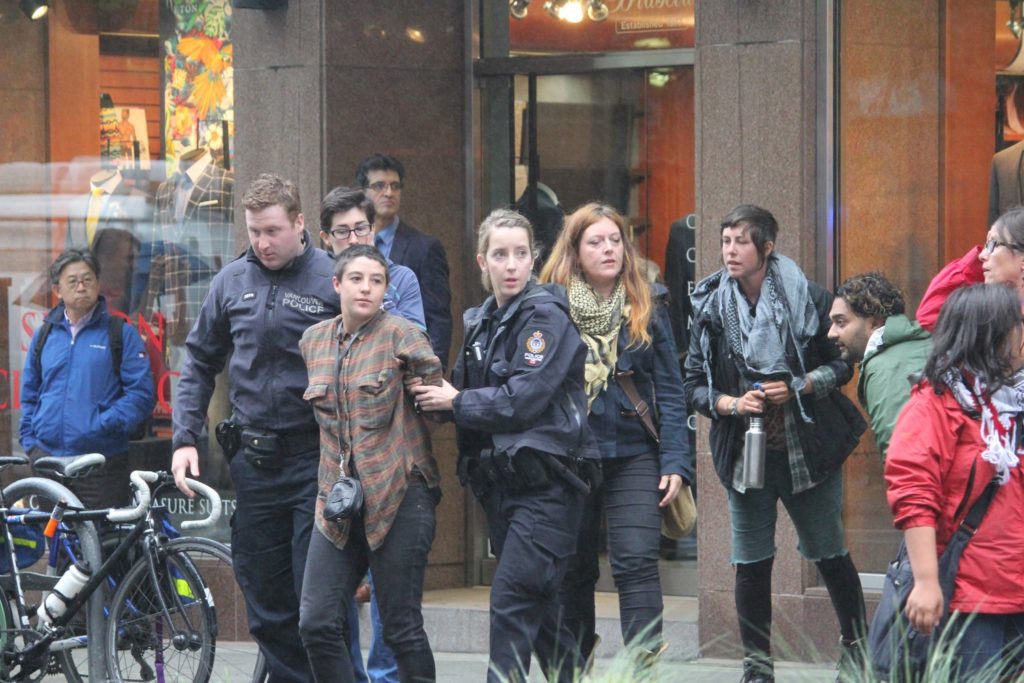 On Tuesday August 9, 2016, I joined the Secwepemc Womens Warriors Society, Ancestral Pride, Indigenous activists, and allied supporters in an occupation of the Imperial Metals office at 580 Hornby Street. Later that morning, part of our group also occupied the nearby Mining Association of B.C. office. These occupations were in protest of the ongoing disasters perpetrated at the Mount Polley mine, a violently disturbed and polluted site that is already back in operation, after a massive tailings breach occurred two years ago. The occupations served as follow-up actions to a caravan of Indigenous land defenders, activists, and supporters who traveled to Secwepemc territory from Vancouver, BC on August 3 – August 5 to visit the Mount Polley mine, hold workshops, and build relationships. On the rainy Tuesday morning, we gathered a block away from Imperial Metals before beginning the occupation.

At 9:15 a.m., we entered the nondescript office building at 580 Hornby Street, where the Liberal Party offices are also housed. We entered the building through public access of the front door, meeting no security on the entry floor. We rode the elevator to the second floor Imperial Metals offices. One group of us entered and occupied the offices, where the CEO of Imperial Metals stood with his back to the glass front door. In the hallway outside of the offices, fifteen more activists chanted and called for Imperial Metals to get out of Secwepemc territory, communicating to those inside through the glass entry way. 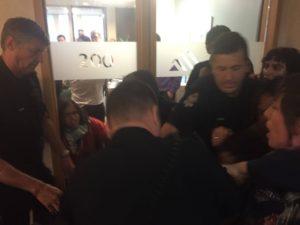 The occupation of these offices was peaceful from the beginning. An Indigenous woman burned sage outside of the office. We sang the Womens Warrior Song, locking arms and forming a half circle around the thin piece of glass that separated us from our comrades inside the office. Within fifteen minutes, between ten and fifteen police arrived, emerging out of the stairwell access on the second floor.

There was no verbal warning to disperse from police officers who arrived on the scene, no moment for protestors committed to the action as witnesses to stand back, no time for protestors to find their balance and consider their role in the protest. As soon as the cops arrived, they immediately placed hands on protestors whose arms remained locked in a half circle. Cops dug elbows into backs, used hand holds and hip checks to pull protestors apart from one another. I watched as two of us were thrown to the ground, one man a grandfather. He was thrown face down on top of the first person. Both were cuffed. 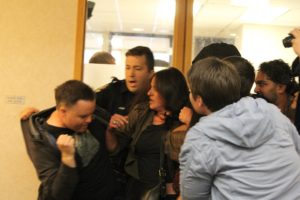 I watched from my position in our half circle, braced against the two cops pulling on either side of my body, as the woman to my left was pushed against the wall and dragged to the floor. Someone further to my left yelled that they were in pain, our half circle continuing the Womens Warrior Song and bracing ourselves against the unnecessary use of force by the police tactical unit called onto the scene.

In the scuffle as bodies were hit, wrenched apart, and shoved, I was thrown to the ground on my back by a cop who placed his forearm across my neck, pressing down and blocking my airway. Someone standing above me yelled if I could get air. At no point did I physically lash out at the cops. I made no physical advance towards them that called for the use of force against my body. The same is true for every protestor present at yesterday’s action.

In all, four were arrested. The first to be cuffed was checked out by paramedics before leaving the scene for a possible concussion. The use of violence to “disperse” yesterday’s occupation was unsafe and unwarranted in response to peaceful protestors practicing civil disobedience. There were at minimum ten police cars, a police wagon, and an ambulance parked outside the building that holds the Imperial Metals offices. 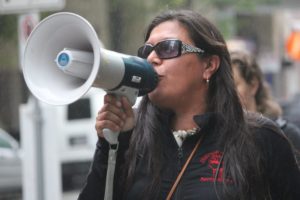 This forceful demonstration by Vancouver’s police will likely go unchecked, and it is a crude reminder of the very real partnership between the police and corporations, who increasingly seem to be protected by the cops – whether VPD or RCMP, whether inside Imperial Metals or on the land in Indigenous territory. Here in urban Vancouver, where Mayor Gregor Robertson professes a supposed opposition to Kinder Morgan’s Trans Mountain pipeline expansion, even partnering with local Coast Salish Nations leaders in calling on the federal government to reject the expansion proposal, he remains quiet about the Mount Polley mine disaster and its environmental and social affects. The truth is, the VPD takes their leadership from the Mayor of Vancouver, and so yesterday’s repression of peaceful protest is the real evidence of Robertson’s allegiances – allegiances to big business in the form of natural resource extraction. In this light, his opposition to the Trans Mountain pipeline seems like just an easy public relations move in this, the “greenest city.”

The same can be said for Burnaby’s Mayor Corrigan, who, on the same day that Indigenous activists and their allies used their bodies to disrupt another day of business at Imperial Metals, was speaking to a federal review panel about the disastrous implications of the recent approval by the National Energy Board of the Trans Mountain pipeline. It’s not enough to applaud these civic leaders in their verbal professions of environmental preservation. Instead, for those of us living in Vancouver and the surrounding urban centres, we see the true commitments of our liberal leaders in moments like yesterday, when the Mayor’s power expressed itself through the police repression of Indigenous and environmental activists.