No one is holding their breath, but after ten years of struggle, including two tent cities, numerous trips to city hall, demonstrations, street theatre and paint-ins, it seems like a little victory. 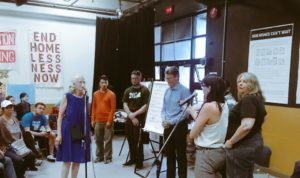 On August 2nd at a packed meeting in the Carnegie Theatre in Vancouver, Mayor Gregor Robertson agreed that social housing on the city-owned lot at 58 West Hastings in the Downtown Eastside should have 100% welfare/pension-rate rents.

The struggle isn’t over. The Mayor didn’t agree to fund the housing, just to rezone it by June 2017. He says the city will have to get money to build it from other levels of government.

The meeting at Carnegie was the result of a sort of occupation of city hall a few weeks earlier by residents of the current tent city and supporters from the Vancouver Area Network of Drug Users (VANDU) and other groups. At the Carnegie meeting diverse groups representing the Chinese community, members of the African community, drug users, tent city residents and the Carnegie Action Project (CCAP) all argued that the city should adopt the four points of the Our Homes Can’t Wait campaign, already endorsed by ten DTES groups.

Jannie Wing-Sea Leung of the Chinatown Action Group told the Mayor and several city staff that the city should build 100% welfare/pension rate housing on ten city-owned sites in the DTES. She also said they should buy the site at 105 Keefer St. that is currently slated for mostly condos.

Debra McNaught of CCAP called for preservation and improvement of the Single Room Occupancy Hotels until new housing can be built. “All three levels of government have utterly failed this community,” she said.

Al from VANDU called for a rent freeze.

Martin from the 58 West Hastings Tent City told the Mayor, “We won’t let the City develop this as a social mix site.”

The group had decided before the meeting that the bottom line demand was a commitment to 100% welfare/pension rate housing at 58 W. Hastings. So after the Mayor spoke about how bad other levels of government were, Aiyanas Ormond, who co-chaired the meeting, produced a scroll with the basic demand on it. The audience chanted “sign it, sign it.” Councilor Andrea Reimer and the Mayor hesitated because of the timeline. In the end, Karen Ward wrote a new agreement on the flip chart, King Mong Chan handed the Mayor a pen to sign it, and he did.

As an added bonus, both politicians were pressed to take the Welfare Food Challenge in October. This is a stunt organized by Raise the Rates to pressure the province to raise welfare rates. Under pressure from the audience, both said they would if their doctors would allow it, and if their doctors wouldn’t allow it they would be public about that.

Lots more work to do. 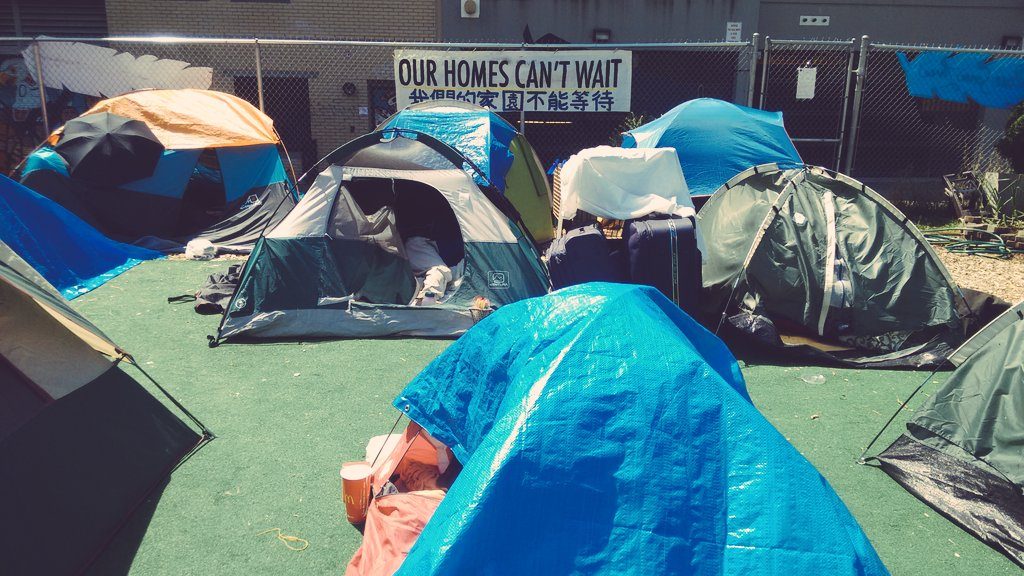