The rally and parade on Saturday, July 23 organized by Stop Demovictions in Burnaby and Alliance Against Displacement, was a celebration of community, hope and persistence. Nearly a hundred concerned people came together to support the movement and to voice their demand for affordable housing in their diminishing neighbourhoods as a basic human need. Showing up, being seen and heard was yet another sign that we won’t go without a good fight for our rights.

We gathered close to the building that we had previously occupied, demonstrating that being evicted from there (by an injunction on behalf of the developer, Amacon) does not stop us!

Dressed in her beautiful regalia, Sadie Morris (Nuu-chah-nulth, Irish) opened the rally with an Okanagan song of thanks, and expressed the importance of housing for all people who have or will have no place to go, that homelessness must end. 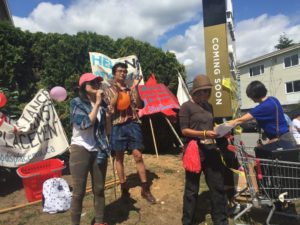 Nancy Yee from the Stop Demovictions Burnaby Campaign stressed that Mayor Corrigan is not doing his job; he’s not protecting Burnaby citizens from demo-viction. And Natalie Knight from The Volcano Newspaper spoke to the crime that is happening in this neighbourhood in bright daylight. She said that the law that is permitting demovictions is criminal and needs to be broken to be changed.

Carrying banners and signs we chanted our way along Imperial Street, rallied at the Amacon sales center, continued on towards Metrotown stopped at the apartments on the corner of Silver and Beresford, which are next to be demovicted. In front of that building, a neighbour said, “We’re losing older rental buildings every few weeks, tenants must leave, the neighbourhood is bleeding, it feels like an open wound.” Demoviction needs to stop or at least to slow down.

We formed a large circle in Maywood Park where our peaceful rally ended after more speeches by people from different walks of life, some already displaced, some facing eviction, and by supporting groups. Speakers reminded us that more than 3,000 units will be re-zoned to be torn down if the City’s proposed “Downtown Metrotown” plan passes in December, with the consequence that thousands of people will be displaced. Sadly, Mayor Corrigan is courting developers and seems obsessed with destruction. He has forgotten about the people. He needs to act on behalf of all Burnaby citizens, not just the wealthy. He has the power to make the changes needed desperately to stop this craziness and keep thousands of people housed.

The movement is picking up and will hopefully lead to a halt or at least a noticeable slow-down of this awful and shameful gentrification. More people, more neighbours need to get off their couch and engage. People are powerful. We are in this together! As a community we are strong. The power is with us people. “Hell No! We won’t go!”

Erika S. lives in a low-rise rental apartment in the Metrotown-Maywood area.