“There should be placement before displacement!” By Karl, Nisga’a Nation, suite 102 5025 Imperial Street Burnaby BC 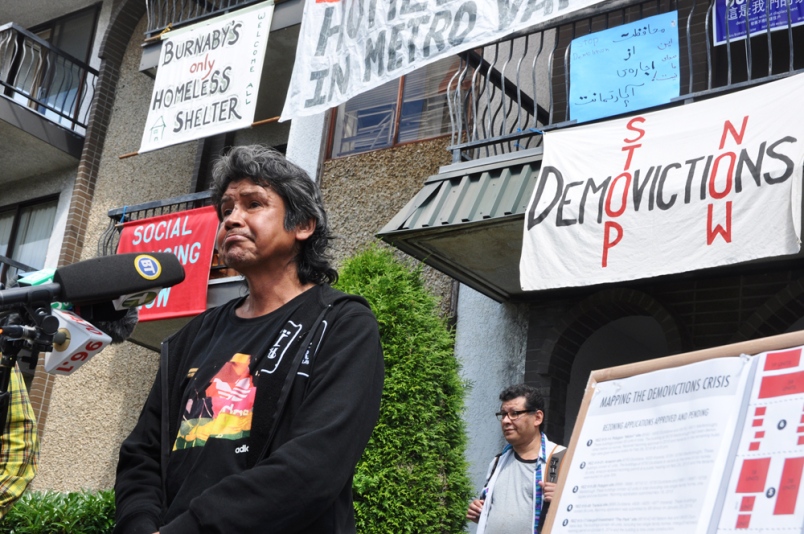 Living homeless, the hardest part is that you can’t get comfortable anywhere. It’s hard to sleep in different places. You don’t feel safe at all. You’re sleeping outside and you don’t have a door to keep people out. Once my brother and I were sleeping out and three guys came and busted us up for no reason. We had to jump up and defend ourselves.

You can’t feel secure when you’re sleeping outside. It’s not the cops that ask me to move, it’s the security guards. They say “this is my area, you have to move out.” They wake you up and tell you to move. The cops just tell me to move along in the morning.

Maybe I drink more when I’m sleeping on the streets. Because it’s stressful. And it’s easier to fall asleep. I have this habit of drinking. When I can’t find a job I get disappointed and I drink more.

I did a lot of temporary work but I never made enough money to pay rent. I’ve been on welfare and I couldn’t ever find a place to live. I tried BC Housing but they never gave me an apartment. I don’t like staying in hotels because it’s not very healthy. The air makes me feel bad and there’s lots of bugs, too many bugs. They keep me awake.

I started sleeping in Burnaby about a year ago because my brother was here and I wanted to live near his place so I could visit once in awhile. He lives in the Edmonds area. He just lives in a basement suite so I can’t stay there. In a year I’ve only stayed there two times. I prefer to stay on the street rather than to stay there, it’s too crowded. I had a friend sleeping outside with me but he found a job so he found a place. I was happy for him. He had been out here for a year before me, on the streets.

On July 10th I was walking along and I saw the protest going on. I was crossing the street with a shopping cart and a lady called out to me. She said I should come sleep in the building. I was sleeping in an armchair in the alley. I was there for two weeks. The cops came by lots of times and they let me stay. It’s scary. You’re half asleep all night long. At first I refused and then I thought about it. I thought I should support those guys because I know what it’s like to be without a home. The people thrown out of that building will be paying higher rents. I know that for a fact. So I decided to come into the building.

That’s why I’m staying here: they should have placement before displacement. But they don’t. It’s secure eh. It feels more secure to have a door I lock. I haven’t had a door I can lock in a long time. Not since I left the north. If I could stay in this apartment I could furnish it. That would be more comfortable. It would be awesome if I could stay in a place. I’d probably get a job right away. It would feel so much better.

If the court orders us to leave this place I’ll be back outside, sleeping outside.