During the twelve days of the Anti-Imperial Squat in Metrotown, more than a dozen homeless people passed through the doors of the evicted apartment building. Most passed by on their daily routines until, as their affidavits show, Maria called them in from her station at the table at the street front of the occupation. The twelve homeless people who joined the squatters in as many days were important but overlooked participants in the occupation at 5025 Imperial. Firstly, they represent a scorned and neglected group in Burnaby, which according to a City Council that refuses provincial money for a homeless shelter, does not exist. Secondly, their struggles show there is no difference between the evicted and the homeless, except perhaps the time of day. These homeless squatters were not passive recipients of services at the occupation, they were political activists who joined the squat in order to fight demovictions and displacement. 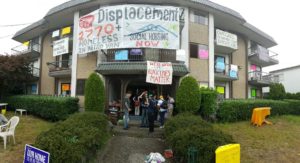 On Tuesday July 12 we were served with notice that the building owner, Amacon Development Corporation, had applied for an emergency court injunction to break up the Anti-Imperial Squat and we had one day to prepare a defense. We decided to focus our defense on the arguments won at the Abbotsford and Victoria tent cities in the last year: that the court must not displace vulnerable people from properties if those displacements will cause harm. We took four affidavits with homeless people at the squat to show that demovictions and homelessness cause harm, and that the squat was a remedy to those harms. The critical difference between the tent city cases and the Amacon case was between “public” and “private” property, but in each cases the effects on homeless working-class and Indigenous people were the same. The Volcano is publishing three of these affidavits here: read the affidavits from Mohammad, Marvin, and Carl here.

The courts ruled in favour of Amacon’s private property rights, and against the wellbeing of those who would be harmed by the eviction of the Anti-Imperial Squat. The legal precedents Amacon used were cases where the courts supported capitalist business claims for fisheries, logging, and mining development over Indigenous community claims to their common, non-capitalist survival relations with fish, forests, and hills. Based on these claims, the courts found that an individual corporation’s capitalist property investment held legal priority over the wellbeing of a community’s non-capitalist survival relations with housing shelter. Pivot lawyer DJ Larkin has explained that Canada’s property laws are outliers in terms of international and even commonwealth country laws, which support communities against the harms of displacement even off of private property. The Anti-Imperial Squat highlighted the interests of communities against private property; after the squat this struggle continues.

Watch a short video clip below of Dave Diewert, an organizer with Alliance Against Displacement:

Burnaby’s Only Homeless Shelter – Inside the Metrotown demovictions occupation

“There should be placement before displacement!” By Karl, Nisga’a Nation, suite 102 5025 Imperial Street Burnaby BC