The Claim that Super InTent City is a failure doesn’t measure up: By Flora Pagan, Lekwungen Territories (Victoria) 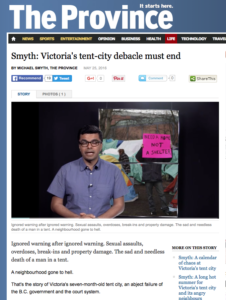 As the provincial government’s new injunction hearing approaches, a new headline has emerged in Victoria newspapers: Super InTent City has “failed.” But the measures government officials and anti-homeless groups have used to create the idea of the “failure” of Victoria’s Super InTent City (SIC) devalue the experiences and lives of its homeless residents. Their measures perpetuate stigmatizing narratives of disorder, criminality, and failure of those living in poverty, and are being used to justify the provincial government’s application for a court injunction to remove the camp with police force.  If the courts reverse their previous findings that the camp improves the lives of homeless people, they too will join the hateful moral panic targeting homeless people rather than homelessness, and will join the chorus of those that fail to listen to what homeless people have to say about their own needs and lives.

BC’s Minister Responsible for Housing, the Mayor of Victoria, Christ Church Cathedral, and Mad as Hell Victoria have all joined together to declare SIC a failure. Minister Rich Coleman cited specious fire safety concerns and an increase in calls to police in the area as the province’s reason for seeking another injunction against SIC. While perhaps intended as a call for housing funding, Mayor Lisa Helps has argued that leaving people homeless is more financially costly than providing housing, citing complaints about the City’s increased costs for park and public works staff, and bylaw and police officers,  feeding the narrative of failure. Christ Church Cathedral claims that an increase in needles and feces in the neighborhood, injection drug use within sight of their school, and two incidents where individuals were removed from the property are grounds for another injunction application. Mad as Hell Victoria, a local NIMBY group, also cites an increase in needles, feces, and a Victoria Police statement that there has been a 46% increase in calls for services around the tent city relating to violence, open drug use, break-ins, thefts, and public disorder. These groups and elected officials have all evaluated SIC, and have deemed it a failure based on their own evidence.

However, the standards they’re using to measure SIC are all wrong. By citing an increase in police calls, Coleman and Mad As Hell wrongly conflate police calls with crime. Coleman requiring SIC to comply with fire safety provisions without providing residents with the resources to do so is unfair and sets them up to fail. Helps comparing the financial costs of cleaning and patrolling around the tent city with the costs of social housing is a start, but it still ignores the cost to residents’ lives if SIC is shut down. Anecdotal “evidence” from Mad as Hell and Christ Church about feces and garbage around the tent city demonstrates that they value clean quiet streets more than they value human beings. Their measures find the tent city has failed, but what if there is a better way to evaluate the successes of SIC?

When Chief Justice Hinkson denied the province’s application for a temporary injunction in May, he listened to SIC residents. He cited the numerous benefits of SIC for residents, arguing that public nuisance complaints did not outweigh the positive impact of SIC on residents’ safety. He cited benefits such as residents’ improved physical and mental health; keeping belongings safer; not having to submit to strict shelter rules; feelings of safety, community, and a sense of belonging; and access to health and social services. He ruled that if SIC was broken up, people would be displaced to other locations around the city, to spaces that are less healthy and less safe.

If we as a community listen to what SIC residents’ are saying about their home, hearing about their measures of success,  we would be choosing people’s lives over staffing costs, over the “unsightly” presence of needles and feces, over noise complaints, and over our own feelings of discomfort when we see people who have less than we do. I think these are the measures we need to consider, and I hope that Chief Justice Hinkson remembers these measures when SIC returns to Court on June 27.

Thanks to Bruce Wallace and Alyx MacAdams for their initial support in writing this piece. Special thanks to those living at Super InTent City and in tent cities across the settler state. By claiming public space, by demanding that we see you and listen to you, you make our communities better for all.

For more on the effects of poor bashing and anti-homeless ideas on the lives of low-income and homeless people, see: Karen Ward, DTES Street Sweeps are social cleansing / “We are somebody”: Abbotsford Homeless take the city to court / The ugly reality of anti-poor hatred