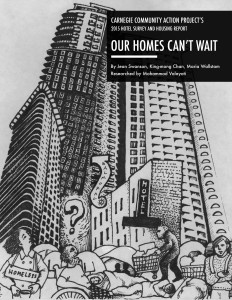 Called Our Homes Can’t Wait, CCAP’s annual housing report says that average rents in privately owned and run Single Room Occupancy hotels have now hit $517 a month for a single room with no private bathroom or kitchen. That’s an increase of $24 a month from last year. It leaves residents who have to survive on basic welfare with only $93 a month for food and everything else. The report also points out that average rents in the fastest gentrifying hotels have virtually doubled from $444 a month in 2009 to $905 a month in 2015.  One hotel advertised an SRO room on Craigslist for $1500 a month.

The CCAP report also shows how many condos and market housing units are being built in the DTES.  In Chinatown, the rate of unaffordable to affordable (welfare/pension rate) new housing being built is a whopping 55 to 1. In the DTES as a whole it is 8 to 1.

CCAP has recommendations for all three levels of government to stop this homelessness crisis. The city should buy or lease SRO hotels to keep them from gentrifying, stop giving incentives to SRO owners to upgrade unless rents are controlled; stop market housing development in the DTES; and change the city’s definition of social housing so that low-income people are not excluded from it. CCAP wants the province to raise welfare, disability and minimum wages; enact rent control by the unit, not the tenant; and build 10,000 units of social housing a year in BC. The federal government should enact a national housing program immediately that would provide funds to build enough low-income social housing in the DTES to replace 1,000 SRO units a year for the next 5 years.