So much at stake at Madii Lii: An Interview with Richard Wright 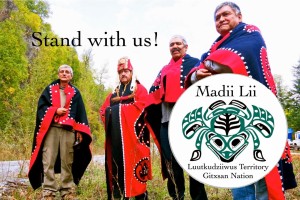 It seems everyday now Christy Clark’s LNG dream is slipping farther away. The price of natural gas has plummeted, companies have pulled out, and the jobs and money that she touted in 2013 have failed to materialize. In the Lower Mainland some environmental activists may be breathing a sigh of relief, but for Indigenous communities on the frontline the struggle continues. Energy giant Petronas is still planning to build a multi-billion dollar LNG plant on Lelu Island, and the federal government is considering giving it a green light.

In March I spoke with Richard Wright, one of the spokespersons for the Madii Lii camp north of Hazelton, where a clan of the Gitxsan Nation are reoccupying their traditional territory in resistance to both pipelines and government.  Yet, as Richard was quick to point out to me, the building of the Madii Lii camp has always been about more than LNG.

In August 2014 the hereditary leadership of the Luutkudziiwus clan of the Gixtsan nation closed their territory to pipelines, in particular the Prince Rupert Gas Transmission (PRGT) which, if built, would bring fracked gas from Treaty 8 territory around Fort St John to a terminal on Lax Kw’alaams territory, at the mouth of the Skeena River.

“There’s too much at stake,” says Richard, “too much risk to allow this pipeline. It could have serious negative impacts to all the fish of the Skeena River.” The planned site of the LNG Terminal, Lelu Island, is a key salmon spawning ground. If built its effects would be devastating not only to the communities near by, but all the peoples upstream who rely on the salmon for their livelihoods.

While the fight against LNG may be recent, the struggle that Richard and the rest of his community are engaged in is much older. “Our ancestors grew up living off the land and then the imposed Indian Act system came in and moved them into reserves. The government burnt down all of our homesteads to get rid of evidence of occupation.” The Gitxsan nation never signed a treaty or ceded territory to the Canadian government. Also much of their hereditary leadership structure is still in tact.

Learning from organizing against gentrification in San Francisco: Interview with Chanel Ly and Wendy Pedersen