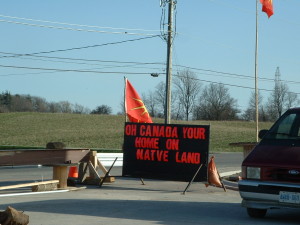 The Tao (way) of deception, Tabula Raza (empty slate or no history), Terrus Nullius (empty land): these are some of the ways that the country now known as Canada has naturalized or indigenized its presence here. I’m going to share a few very brief thoughts on how these concepts have been used in the past as well as the present.

One of the ways the Crown justified the taking of Indigenous lands was to use language that dehumanizes the First Nations peoples as non-humans who have no history, and to make up laws that ignore (forbade) our own systems of government that we developed over 10,000 years. We can already see how the Tao of deception makes use of these doctrines or beliefs.

Why do so many Indigenous women get murdered or go missing every year? Why are First Nations people 4% of the population but make up 24% of the people in prison?  It’s not because of an inherent criminality that lives in Indigenous peoples. The taking of our land depends on removing Aboriginal bodies, yet our very presence contradicts the ideas of empty land and no history.

One of the more interesting ways to create a mythology of Tabula Raza was for settler society to portray Indigenous people as “stuck in the past.” We are frozen in time and unable to be a part of history in the making. If we are not making history then the land is (still) up for grabs, right? Of course when a First Nation signs a modern day treaty, it is always a historic moment. But this is only because Canada has gained justification for taking the land, not because we are seen as active creators of history.

Vision Vancouver has been pushing an agenda of affordable homeownership despite the fact that by their own admission they operate on unceded Coast Salish territories. They continue to peddle land that they do not own legally or have right to morally. The city of Vancouver has quite literally settled the land after the Salish people but has constructed a narrative that self-legitimizes the illegal occupation of the land.

These are just some of the ways that Canada and the city of Vancouver has made their presence seem normal on Indigenous territories. It’s important to not believe the stories your enemy spins. By knowing the Tao of deception, you can set out after your enemy and arrive sooner.