By Maria Wallstam & Sean Phipps On May 16, 2016
Share FacebookTwitterGoogle+Email 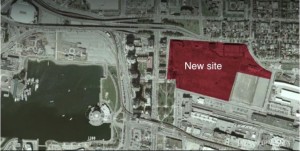 Last year the BC government announced that it will be going ahead with its $1.2 billion relocation of the St. Paul’s Hospital, only two years after promising to renovate the old location. The 700 bed hospital-campus is set to be built on a 18.5 hectare piece of land on Station Street in the southern part of the Downtown Eastside.

A few years ago when the “super-hospital” McGill University Health Centre (MUHC) in Montreal was being built adjacent to the low-income neighbourhood of St. Henri, land values skyrocketed, speculation went rampant and gentrification accelerated. What will happen when a mega-hospital is built in the Downtown Eastside in close proximity to several hundred SRO rooms on Main Street and in Chinatown?

The new hospital site will be up to three times the size of the current hospital. The hospital currently has 452 beds and last year the hospital had 383,000 total patient encounters with approximately 60% of the patients coming from outside of Vancouver. With expanded facilities, it is likely that the number of out of town patients will drastically increase, and with it, the demand for new accommodation.

While there are over a dozen hotels within a 1km radius of the current Burrard Street site, there is only one hotel (the Patricia Hotel) and one backpackers hostel (C & N Backpackers Hostel) in a 1km radius of the new site on Station Street. The False Creek flats are zoned industrial, which means that most of the new accommodation will have to be provided in the Downtown Eastside in new developments or through the redevelopment of already existing housing.

When the Woodward’s development was built, property values, taxes and rents increased and about 400 affordable SROs were lost to low-income residents in a one block radius of Woodward’s. Some of the hotels are now renting SRO rooms for over a $1000 a month and listed on Airbnb for $100/night. Without measures to regulate renovations and evictions of low-income tenants, it is likely that the new St. Paul’s hospital will repeat this pattern.

The new St. Paul’s hospital is close to the highest concentration of low-income housing in the City. Nearly 500 SRO rooms are in the vicinity of the new hospital on E Georgia, Keefer, Prior, Union and Main Streets. The biggest are the Cobalt (98 rooms) and the Ivanhoe (104 rooms) which both rent for less than the average privately owned Downtown Eastside SRO hotel (about $450 a month).

Owners of these hotels and others could find excuses to evict or buy out current residents and rent at higher prices to patients, hospital workers and workers in businesses that will serve the new hospital. In Montreal, flippers started converting homes in anticipation of the hospital’s housing demand years before the actual hospital opened. Unless the City takes immediate measures now to protect low-income SRO hotels in the Downtown Eastside, we are going to see effects similar to those experienced in St. Henri.