Homeless on the Stage

By Luisa Jojic & Priscillia Tait On May 16, 2016
Share FacebookTwitterGoogle+Email

For a Muse of Fire is an original live performance piece set on the #20 bus that weaves personal stories from the DTES, quirky dialogue, wild humour, original text and a little Shakespeare. The piece aims to bring the issues of homelessness, community, diversity and inclusion in our city to life on stage. By bringing them to voice, For a Muse of Fire gives strength to the act of working together for positive change, thereby creating a community that listens to each other, respects each other, and helps each other.

The project involves diverse individuals who live, work or study in Vancouver’s Downtown Eastside (DTES) including those who have experienced homelessness or are currently vulnerably housed. It is an opportunity for local residents to explore, learn, create and transform through the art of theatre. It offers audiences a unique perspective on the lives and experiences of DTES residents and aims to cultivate respect and understanding for each other.

From the cast: My name is Priscillia Tait. I’ve been involved in several terrific community theatre projects, but “For a Muse of Fire” turned out to be the best one yet. During the improv workshops, we had the freedom to invent our own characters and come up with dialogue and interactions for them. I was determined to create a substantial role for myself, so I put lots of energy into developing “the Storyteller” and “the Transit Queen.” Our fearless leader Luisa maintained an atmosphere in which we felt safe to explore in a playful way. There was lots of talent and enthusiasm within our group and we developed great camaraderie. It felt like a real team.

For a Muse of Fire was collaboratively written by the members of the cast through group discussion, character development, improvisation and writing exercises. The setting of the #20 bus was chosen as it represents a place where a cross section of our city’s community comes together. The play weaves real stories with imagination and the playful freedom of theatrical fantasy. 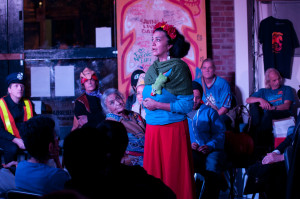 It has since been performed twice at the Justice Institute of British Columbia for the students, staff and faculty of the law enforcement training program there, to contribute to their social justice and anti-discrimination education. After each show, we facilitate a dialogue on the issues that are raised in the play, giving the audience and performers a chance to discuss perspectives and engage in communication around the issues.

We are hoping to present another free community show in July at the SFU Woodward’s building. Keep your eyes open for posters advertising the show!