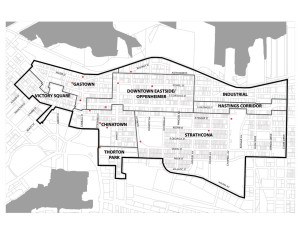 In terms of affordability, the citywide target in new social housing is 50% at income assistance or Household Income Limits (HILs) and 50% at affordable market rents. To address housing need in the Downtown Eastside and achieve the policy objectives of this plan, the target for affordability for new social housing for the Downtown Eastside will be one-third at income assistance, one-third up to HILs and one-third at affordable market rents. In pursuing this target, greater flexibility may be required to provide opportunities to maximize the delivery of social housing.  – “Definition of social housing: target for affordability,” from the DTES Local Area Plan draft vision.

But the city’s definition of social housing is housing that is owned by a non profit or government and the rents have to be as follows: half of the units have to rent for the Housing Income Limits (HILS) or below. The HILS rate for a bachelor unit is $850 a month. The other half can be at affordable market rent. This means $1400 or more for a bachelor unit. Nothing HAS TO be at welfare shelter rate. But, because low-income reps on the LAP committee fought hard, the draft plan proposes a special definition for the DTES: one-third at welfare shelter rate; one-third up to HILS; and one-third at “affordable” market. This is a little better than the city-wide definition, but not nearly good enough. With this definition, the city proposes that over the next 30 years, the DTES should get 4400 more new social housing units to replace the SROs. BUT, only a third of them, or 1452, will be at welfare rate. And this is over 30 years! Many SRO residents who need good social housing will be dead in 30 years.

There’s another problem with the definition of social housing. The draft plan also says that the city will give incentives to SRO hotel rooms to upgrade to social housing and have a kitchen and bathroom. Sounds good. BUT this means two hotel rooms would have to be combined, reducing the number of rooms available by half. Where do the evicted people go? And, since its going to be “social housing,” how much of it will low income people on welfare, disability or basic pension, be able to afford? Using the example of the American Hotel, only six units out of 42 are renting for $400 (actually above welfare shelter rate) and that for only ten years. The other rooms are renting at $500-675.

So that’s how a definition can displace a community. But not if we fight back. Be sure to mark March 12 on your calendar and come to city hall to speak out for a definition of social housing that doesn’t exclude low-income people.